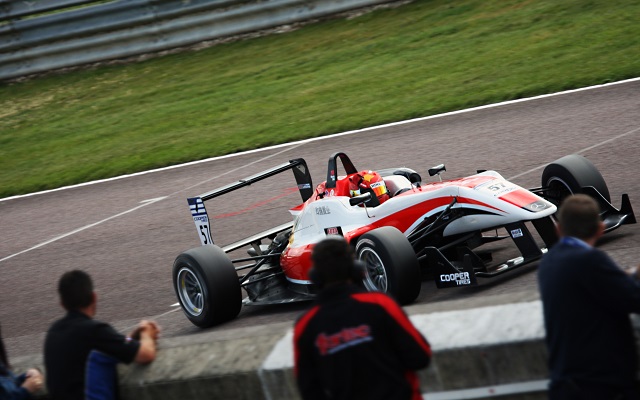 Fortec Motorsports driver Martin Cao came out on top in a race-long battle with teammate Matt Rao to claim his first victory in the British F3 series.

Cao managed to steal the lead from poleman Rao off the line and sat in first place when the race went into its only safety car period, caused by a startline collision between Double R teammates Max Marshall and Camren Kaminsky.

The incident in question put Kaminsky out of the race and resulted in a puncture for Marshall, who managed to have his tyres replaced and then catch up to the field before the race restarted.

Cao managed a stellar restart, but came under pressure from Rao, who soon retook the lead on lap 7. However, the Chinese driver kept pace with Rao over the subsequent laps and then forced his way back into first on lap 15.

From that point on, Cao kept Rao at a safe distance on his way to picking up his maiden victory, eventually finishing a second clear. It was Rao, however, who took the bonus point for the fastest lap of the race.

Peter Li Zhi Cong managed to keep Marshall behind after the restart and then had a rather calm race on the way to his second podium of the season.