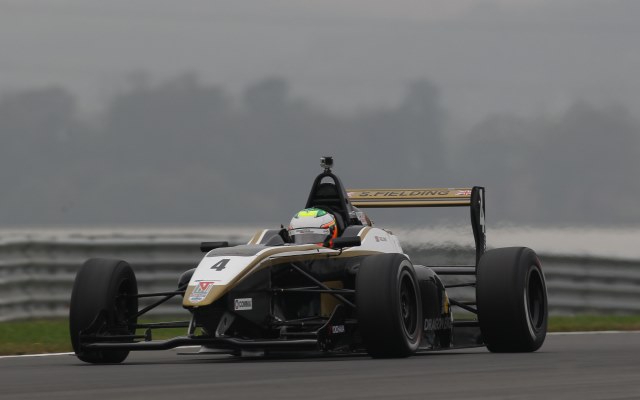 Fielding built up a lead of 1.3 seconds on the opening lap as Russell scrapped to keep hold of P2, but Russell ensured that was as large as the difference would get, cutting Fielding’s advantage down to 0.8 seconds on a couple of occasions – the second of those being on the last lap.

Russell’s second-place was the karting graduate’s best result for nine races, and allowed him to extend his points lead from nine to 17.

Rebuffed by his Lanan team-mate Russell on the opening lap, Struan Moore held third place throughout. Raoul Hyman had got up to fourth ahead of the third Lanan car of Arjun Maini at the start, but was then shuffled down to seventh on lap three.

Maini therefore took fourth and kept his place as Russell’s closest rival in the title race, Will Palmer came from ninth on the grid to finish fifth and Diego Menchaca completed the top six. Seventh drops Hyman to fourth in the championship, 27 off Russell, with Fielding up to third, only 23 off the leader.