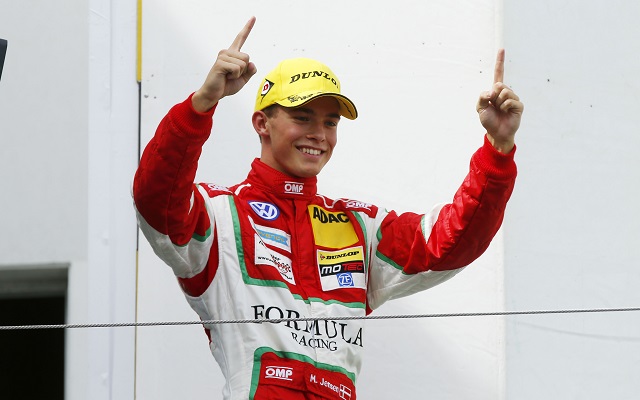 Mikkel Jensen‘s second victory of the penultimate weekend of the 2014 ADAC Formel Masters season at Sachsenring mathematically secured the series crown for the Dane.

Jensen, driving for Neuhauser Racing Team, converted another pole into his ninth victory of the campaign, making him champion with another four races to go.

Just as the German F3 race before it, the ADAC Formel Masters event began under the safety car due to a severely wet track.

The green flag was out after just one lap, however, and it was Jensen who led the way ahead of Lotus rookies Joel Eriksson and Dennis Marschall.

Jensen immediately began gaining lots of ground on Eriksson, who himself was pulling away from Marschall – as the German was busy defending from a charging Igor Walilko.

The battle for third lasted for several minutes and finally saw Walilko pass Marschall round the outside of turn one. Neuhauser’s Tim Zimmermann, who had started in fourth, soon managed a different pass on Marschall in the very same corner to reclaim his original position.

Just then, the field having bunched up behind the fight for third, a collision between Kim-Luis Schramm and Nico Menzel brought out the safety car, evaporating Jensen’s lead.

However, the Dane was unfazed by such a development and immediately established a new solid advantage over the subsequent restart – whilst, behind him, Eriksson found himself under pressure to Walilko.

The Swede soon yielded to the Polish driver and was overtaken by Zimmermann for third shortly thereafter.

The top four would remain in those positions for the rest of the race, with Jensen claiming the win and the title and with Walilko celebrating his maiden podium in second.

Jensen’s main rival Maximilian Gunther had a difficult race – he got up to fifth in the closing stages of the race, but then went off and lost a plethora of positions.

As such, Marschall picked up fifth, ahead of Marvin Dienst and Fabian Schiller. Gunther recovered to eighth, securing reverse-grid pole for race three, while Giorgio Maggi and David Kolkmann rounded out the points.