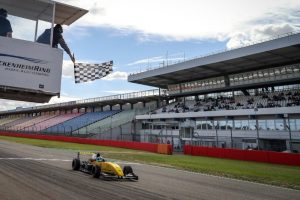 Max Fewtrell took his third straight Formula Renault Eurocup win to increase his lead heading to the final round, after rival Christian Lundgaard ground to a halt while battling with the Briton.

After qualifying on pole, Lundgaard led Fewtrell in the early stages, with just under a second between the pair approaching the half-way point of the 30-minute race.

That was when the safety car was deployed after their Renault Sport Academy colleague Victor Martins went wide at Turn 1 while running seventh, breaking his suspension with a violent run over the kerb and spinning helplessly into the Turn 2 gravel trap.

At the restart with just over 10 minutes remaining, Fewtrell got a run on Lundgaard into the hairpin.

Lundgaard kept the lead on the inside line but slowed dramatically on the exit, allowing Fewtrell alongside him to move into the lead and the rest of the field to then sweep past.

Fewtrell took victory by eight tenths of a second over Oscar Piastri, who passed title challenger Yifei Ye when the Chinese driver ran wide at the hairpin behind the battling Fewtrell and Lundgaard at the restart.

R-ace GP driver Fewtrell will take a 20.5-point lead over Ye to the final round at Barcelona, with Lundgaard now 36.5 points adrift after his double retirement.

Logan Sargeant briefly got ahead of Piastri at the restart, but found himself passed soon afterwards by Neil Verhagen and Lorenzo Colombo. Colombo went on to beat Verhagen to fourth, with Sargeant getting back ahead of his fellow American for fifth.

Phil Hill took ScoRace Team’s first Northern European Cup class win in 15th, although it wasn’t enough to beat Gabriel Gandulias to second in the NEC standings. Hill’s team-mate Sharon Scolari was fourth in class and jumped up to fourth in the standings as a result. Sargeant ended the season fifth in the standings with two overall wins, but only being entered for points for the first four races.