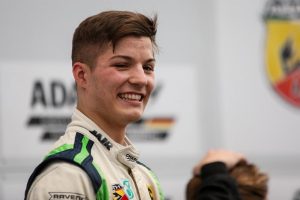 Lirim Zendeli completed his title winning ADAC Formula 4 season with his tenth victory in the final race at Hockenheim.

The US Racing driver came up from eighth on the grid to snatch the lead from Van Amersfoort Racing’s Charles Weerts in the closing stages of the race. Weerts tried to fight back, but Zendeli managed to shake him off before the spitting rain grew heavier and the race was put under safety car conditions.

Racing didn’t get back underway, with Zendeli leading Weerts and Leon Kohler, who took his first podium for Mucke Motorsport

Liam Lawson secured the runner-up spot in the standings despite finishing two laps down after a visit to the pits. He had been battling with Frederik Vesti and rookie champion David Schumacher in the lower half of the top 10 when the three ran side by side and came to blows. Lawson was almost sent into a barrel roll when contact was made with Schumacher, but he managed to land on his wheels and headed to the pits to check if he could continue.

Meanwhile, rival Enzo Fittipaldi had been working his way up through the order after retiring from the second race of the weekend. The Prema driver was running sixth and at the front of a queue of cars when Joey Alders dived up the inside of several drivers at the hairpin. Alders couldn?t stop in time and collided with Fittipaldi, sending him into a spin and damaging the front of Alders? car.

Fittipaldi was able to continue but dropped out of the points, meaning Lawson’s 16th place finish was enough to stay ahead in the standings.

After battling to stay second early in the race, Guanluca Petecof dropped back to fourth, finishing just ahead of Schumacher and Caio Collet. Poleman Niklas Krutten finished eighth, ahead of Mick Wishofer, Oli Caldwell, and Petr Ptacek.