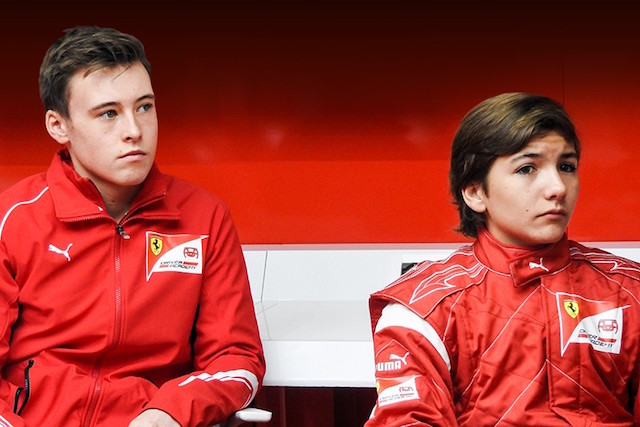 The Ferrari Driver Academy has added single-seater newcomers Marcus Armstrong and Enzo Fittipaldi to its line-up ahead of 2017.

Both drivers were signed following an evaluation at Fiorano in November.

New Zealander Armstrong, 16, raced for the FDA-affiliated Tony Kart team in karting, and made his European single-seater debut in Formula Renault near the end of the 2016 season, finishing fourth in his second race in NEC and qualifying fifth for his Eurocup debut.

He will race in his native?Toyota Racing Series in the new year, and his FDA status could translate into a Formula 4 campaign with Prema following recent tests.

Fittipaldi, grandson of two-time Formula 1 champion Emerson and younger brother of Formula V8 3.5 racer Pietro, competed in Ginetta Juniors in Britain this year with a best finish of eighth, and?made his single-seater debut in the Mexican F4 race supporting the country’s grand prix in October, finishing sixth in the second race.

The 15-year-old had been preparing for a campaign in British F4 next season, but like Armstrong has since tested with Prema.

Ferrari says Armstrong and Fittipaldi will officially join the FDA in January alongside the existing drivers Charles Leclerc and Antonio Fuoco, who will race in GP2 for Prema next year, GP3 racer Giuliano Alesi and F3 driver Guan Yu Zhou.

Joining Armstrong and Fittipaldi at the Fiorano evaluation were Simone Cunati and Lorenzo Colombo – two of the top Italians in the domestic F4 series – and Spanish Tony Kart driver David Vidales, 14, who came second in the world junior karting championship.