Felix da Costa back to winning ways in race two 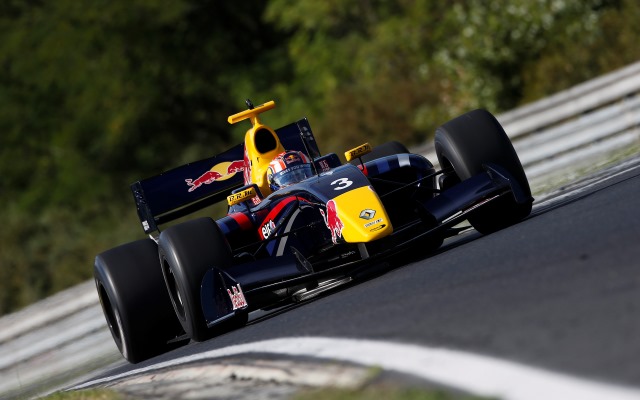 Antonio Felix da Costa returned to form with a convincing win over Formula Renault 3.5 rivals Kevin Magnussen and Stoffel Vandoorne in race two at the Hungaroring.

Felix da Costa actually slipped to third from second on the grid as Vandoorne got the jump on him to follow Magnussen into turn one.

Vandoorne pitted at the end of lap 11, with Magnussen stopping a lap later and rejoining just ahead. Felix da Costa made his stop one lap later and capitalised on the young McLaren pair holding each other up to rejoin ahead. He ran away into the distance, setting the fastest lap on his way to a 6.8 second lead.

Unable to keep pace with Felix da Costa, Magnussen spent the closing stages under pressure from his closest title challenger Vandoorne but held on to take second by less than 0.7 seconds and extend his points margin over the Belgian.

After an early safety car required when Will Stevens dropped his car on the kerb at turn 11 and crashed into the tyre wall, Nigel Melker was the first driver to head to the pits for his mandatory stop and used the clean air to jump from eighth to fourth once all the stops had been made. He came under attack from Saturday winner Nico Muller?late on but held onto fourth by three tenths of a second.

Muller’s Draco team-mate Andre Negrao finished sixth ahead of the late-stopping Marlon Stockinger. Carlos Huertas was eighth ahead of Marco Sorensen, who fell back after a poor launch from fourth on the grid. Oli Webb completed the top ten.