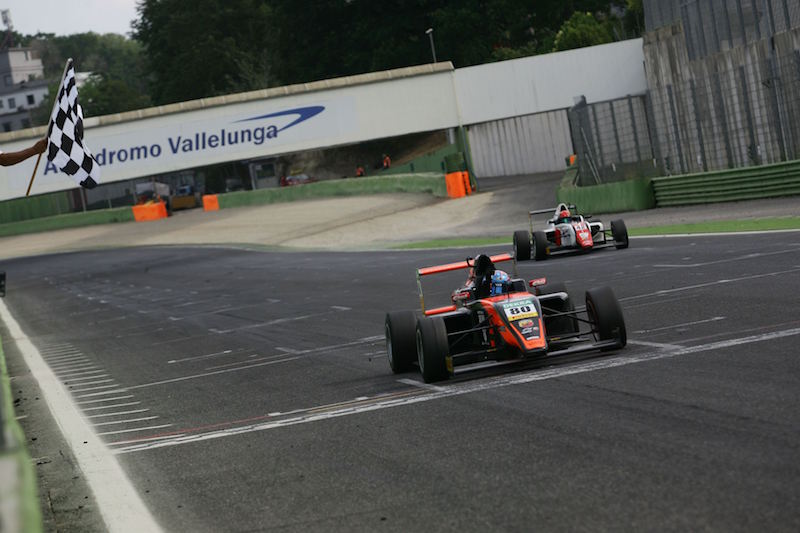 Felipe Drugovich took the win?in the final Italian Formula 4 race of the weekend at Vallelunga.

Petrov snatched the lead of the race from pole-sitter Aldo Festante off the line, but he couldn?t build up much of a gap to his DR Formula team-mate.

Drugovich, Marcus Armstrong, and Lorenzo Colombo joined the back of the duo, making a five way fight for the lead.

Contact between Festante and Petrov caused Festante to drop to the back of the train, promoting Drugovich to second.

He and Petrov then began to pull away from the chasing pack whilst Armstrong, Colombo and Festante all battled for the final step on the podium.

Drugovich found his way past Petrov on lap 12, but Petrov attempted to fight back. The pair ran nose to tail for the remainder of the race, Petrov finishing just half a second behind the Van Amersfoort driver.

A five-second penalty was added to Petrov’s?time for the incident with Festante, but the lead pair were far enough ahead of the chasing pack that he didn?t lose another position, and with Drugovich being a guest driver ineligible to score, the Russian gets a full 25 points.

Festante was leading the battle for third, but had Armstrong right on his tail. The race two winner was looking to add to his maiden victory with a sixth podium of the season, but he was also under pressure from Colombo behind. He couldn?t find a way past Festante, but managed to keep fourth from championship leader Colombo.

Race one winner Ian Rodriguez took sixth after jumping past Sebastian Fernandez and Sophia Florsch on the grid.

Florsch spent the first half of the race trying to find a way past erstwhile championship leader Job van Uitert. Van Uitert couldn?t shake the Mucke Motorsport driver, and Fernandez and Leonardo Lorandi joined the back of the pair.

A move around the outside of Florsch promoted Lorandi to eighth. The rookie then ran side by side with van Uitert, but couldn?t make the move stick. Van Uitert later retired, moving Lorandi up to seventh, where he finished. Florsch followed him across the line.

Colombo and Armstrong are now joint championship leaders, with van Uitert dropping back to third.

Thomas Randle gets Formula Renault Eurocup seat for rest of 2017