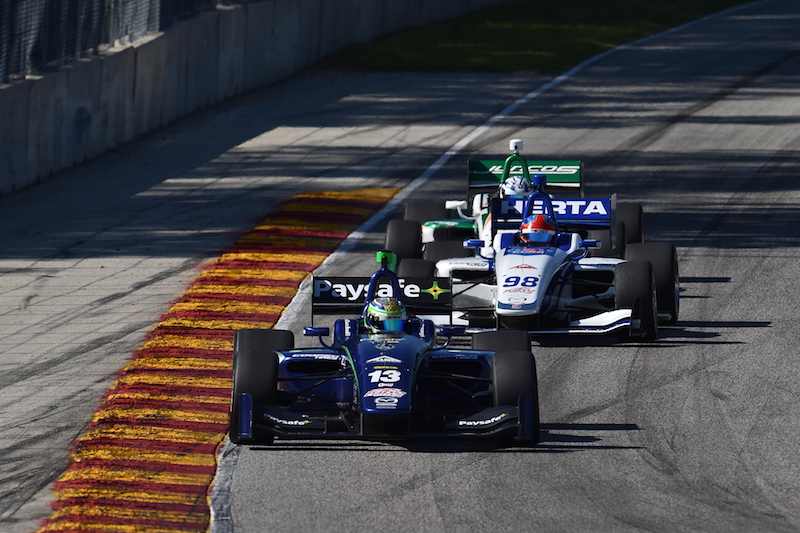 Zachary Claman DeMelo took his first win on the Mazda Road To Indy ladder with a dominant performance in the second Indy Lights race at Road America.

From fourth on the grid progress wasn?t immediate, but with the fastest car in race trim it only took two laps before the young Canadian was all over erstwhile leader and pole-sitter Colton Herta.

For the next two laps the pair battled hard, DeMelo coming out triumphant but then receiving an official warning from the stewards for blocking his rival.

DeMelo didn?t have to change his driving style in response though as Herta started to drop back, despite being on new tyres.

Herta managed to retain second till half distance when championship leader Kyle Kaiser pulled off an off the road overtake at the uphill Turn 5 to take the runner-up spot.

At this point DeMelo was only three seconds up, but by the end of that lap he had extended that advantage to 4.6s and a rather more impressive 10.5s at the end of the 20 lap race.

Race one winner Matheus Leist finished fourth, with Aaron Telitz (who won the Pro Mazda races at the same?circuit a year ago) in fifth.

2016 championship runner-up Santiago Urrutia looked set to take sixth place after struggling with his tyres, before a spectacular left rear puncture on the final lap dropped him to 11th.

Kaiser?s second place means he extends his championship lead, while a gear-related retirement for Nico Jamin meaning the Frenchman drops out of the top three in the standings.