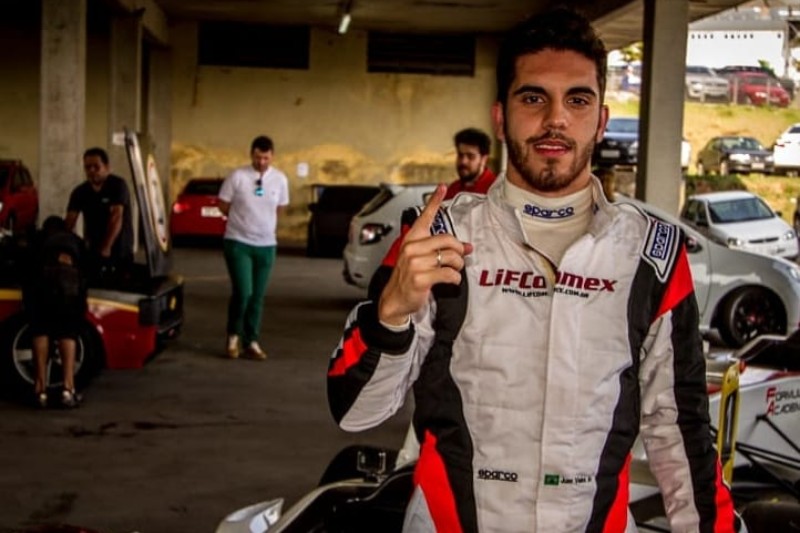 Formula Academy Sudamericana made the delayed start to its 2019 season at Formula 1 venue Interlagos, with Juan Vieira winning both races.

The weekend started in heavy rain, with Lelio Assumpcao heading free practice one. He didn’t feature in the rest of the weekend, with Vieira topping free practice two and qualifying. He took pole by 1.536 seconds, in a session shared with Brazil’s Formula Inter championship.

A race was also held with a shared grid, in which Vieira was not too much slower than the FInter runners. He took F4 victory by 13s, with Rafael Grasti just pipping championship returnee Pedro Burger to second place.

Venezuelan Jose Miguel Alvarado was a lapped fourth, although did not meet the chequered flag.

Reigning champion Vieira took until the final race of 2018 to take victory, but made it two wins in one weekend in the 2019 season opener, with a even more dominant display over a less densely populated field.

Grasti was once again second, this time almost 20s back, with Rafael de Moraes rounding out the podium. Alvarado and Marcelo Servidone both finished on the lead lap, while Berger and Joao Victor Borges failed to start the race.

The weekend ended with a Grasti victory, with a lap five error and then problem for Vieira swiftly dropping him from the lead to the back of the order. He ended up failing to finish.

In the Danish F4 round at Jyllandsringen, Team FSP’s Malthe Jakobsen had his points lead cut despite taking two victories.

Jakobsen took pole in changing conditions at the twisty circuit, and he had an eventful run in converting that into race one victory.

After multiple battles, he ended up beating title rival Jonas Lindhard Nielsen by 1.915s, with Mads Hoe not far behind.

Largim Ali, who had finished a distant fourth in race one, took control of the second race of the weekend. He won by 2.25s from Nielsen, with Hoe beating Jakobsen to the final spot on the podium.

The confidence boost of victory meant Ali took the challenge to FSP team-mate Jakobsen in race three, with each driver wanting to be the one to secure a triple win for FSP. Jakobsen ended up winning their battle, while Lucas Daugaard completed a triple win of his own in the F4 Light class by making it onto the overall podium in third.

However, it’s believed the family-ran driver may have since been penalised, dropping him to fourth behind Nielsen.