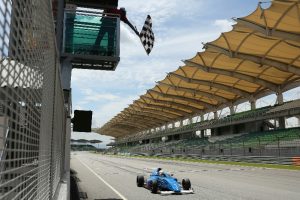 Kane Shepherd moved into the lead of the Formula 4 South East Asia standings at Sepang, helped by the absence of Presley Martono.

Season one champion Martono led the standings after the first three races of the campaign, but was racing in Asian Formula 3 this weekend, which F4 SEA was supporting.

Shepherd repeated his first round pole position, and this time took an easy win over Alessandro Ghiretti.

Ghiretti had a considerable gap to the battle for third place between debutant Antoine Potty and Luke Thompson, which ended in Potty’s favour.

Muizz Musyaffa finished fifth, although probably would’ve finished higher had it not been for an early spin while attacking Ghiretti.

Ghiretti went one better in the reversed grid second race. He hounded Timothy Yeo and Musyaffa in the initial stages of the race, and spent the rest in a battle with Musyaffa after overtaking him for the lead.

Their battle brought Shepherd on to their tails, and a late spin by Musyaffa meant Shepherd finished just 0.236 seconds short of a double victory.

Behind Ghiretti and Shepherd was Potty, who had a significant gap to Yeo and Aidan Wright, another debutant.

The race two result was reversed for the race three grid, giving Musyaffa an advantage over rivals Ghiretti and Shepherd.

Ghiretti was the fastest of the three though, and led by the third lap, followed by Thompson and Musyaffa.

Musyaffa soon moved past Thompson for second, with Shepherd then demoting the Irishman to take third.

The battle for the lead was cut down to just Musyaffa and Shepherd when Ghiretti slowed with a problem and went to the pits to retire. Shepherd closed in, but couldn’t find a way past the Malaysian, who took his first win of the season.

Potty finished a distant third, with Wright and Yeo even further back in fourth and fifth.

Shepherd now leads the points by 28 points over Ghiretti, with Musyaffa 13 behind him. Only three other drivers have congested every race this season.

The Pilgaard Motorsport driver was the only one of the top drivers to finish on the F4 podium in all three races, and won the final race of the weekend.

Championship leader Casper Tobias Hansen was unstoppable in the first race of the weekend, winning from pole and taking fastest lap.

His luck turned in the reversed grid second race though, when he got involved in a massive crash as he rose up the order.

Aske Nygaard Bramming, who finished second in the opening race, and Jonas Lindhard Nielsen collided when Nielsen tried attacking Bramming around the outside of a corner. The move went wrong, sending Nielsen into the barriers and Bramming bouncing across the track into the path of Hansen, who was then pitched into the barriers with force.

All three drivers were uninjured, and Bramming and Nielsen managed to continue in the restarted race.

Frederik Kikkenborg led the field away, with a considerable gap to Formula 5 entrant Mads Hoe and the rest of the field. Such was his gap to his F4 rivals that he let Hoe through, becoming the second F5 driver to take an overall victory this season.

Pilgaard dominated the final race of the weekend, taking a lights-to-flag win over Nielsen by 14 seconds.

Hoe got on the podium again in third, and took the F5 championship lead, with Grundtvig and Eriksen completing the top five.

Hansen got stuck in sixth gear and ended the race a lapped seventh in the F4 class. He leaves Norway with a 65 point lead over Nielsen.