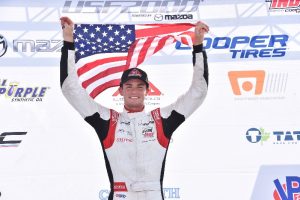 Kyle Kirkwood won both USF2000 races at Toronto, extending his victory run to six and his championship lead to 131 points.

Kirkwood missed out on both poles, a but it only took the run to Turn 1 in the first race before he was in the lead. Poleman Dakota Dickerson of ArmsUp Motorsports kept Kirkwood under pressure for the duration.

An early caution period caused by a crash between Jose Sierra and Darren Keane was the only interruption in the race, but the results were close anyway, with the top 10 split by just over seven seconds.

Frederick broke the track record to take pole for the second race. His victory hopes ended at Turn 3 on the first lap though when he ended up going down the escape road while defending from Donegan. Lindh followed Frederick down the escape road, while Donegan slid into the barriers. Dickerson was spun by Ming, and Kirkwood emerged as the leader at the end of the first lap.

A caution period was required, and on the restart Kirkwood was bettered by Fraga for the lead. It took until lap 17 of 25 for him to get back past thanks to some staunch defence from Fraga, but once through the second win of the weekend was of little difficulty for Kirkwood.

Fraga matched his best result of the season in second, with Lindh completing the podium. The Swede had been 11th at the end of the first lap, but didn’t take long to break into the top six. He came on top in a thrilling battle with team-mate Frederick, and cleared Frost to finish in third place.

Fourth for Frost was an impressive result considering the Singaporean only made his championship debut at the last event at Road America.

Van der Watt finished fifth ahead of Dickerson, who recovered from his first lap move, and Sierra, who started 18th.

Frederick managed to finish eighth, conceding a significant number of points to title rival Kirkwood. The absent Alex Baron slipped from second to fifth in the standings. Kirkwood could realistically secure the title in the next event at Mid-Ohio, which runs as a triple-header.