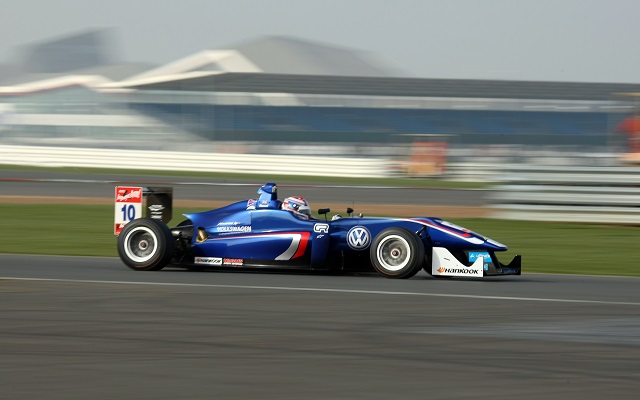 George Russell?s stock rose rapidly at the end of his rookie season in car racing in 2014 by claiming the BRDC Formula 4 title and winning the McLaren Autosport BRDC Award.

After taking those accolades, it was perhaps fitting that his next race weekend ? and his first in Formula 3 ? came at Silverstone, the home of the British Racing Drivers Club of which he became the youngest ever member.

He ended the meeting with his reputation no doubt enhanced even further after winning on his debut weekend in the ultra-competitive FIA F3 European Championship.

Despite his rookie status, there were some high hopes for the 17-year-old going into the weekend after he showed good speed in testing. He lived up to that fanfare on the Friday by qualifying inside the top four for all three races.

The first race didn?t go to plan at the start, when fellow star newcomer Charles Leclerc attempted a move into Vale at the safety car start but lost control on a wet part of track off-line on slicks and sent both drivers spinning.

But after dropping down to 18th, Carlin recruit Russell was able to put in a fine recovery drive to eighth, despite the green flag action being limited by two further interventions from the safety car.

Russell lined up second for race two and this time it was him bidding to pass pole-sitter Leclerc at the start. He did enough to secure the lead off the line, setting him up for victory.

?It was incredible really,? he tells PaddockScout after the final race on the Sunday morning.

?I made a good qualifying, managed to be on the front row and I just got Leclerc from the start and held him off the whole way.

?It was great to get a win on my debut weekend in Formula 3.?

Indeed, by winning the second race of his debut weekend at Silverstone, Russell repeated the feat of 2014 champion Esteban Ocon from 12 months ago (albeit the Frenchman had made his F3 debut in Macau the previous November). 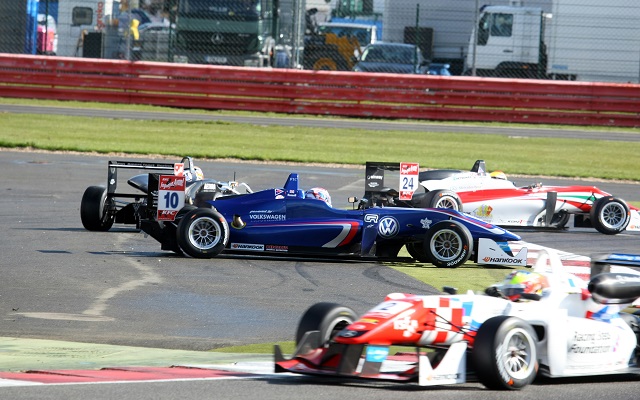 He was facing the wrong way when his F3 debut got the green flag, but Russell recovered well (Photo: Paul Davies Photography)

Race three was more difficult, with Russell falling to sixth in the early laps after struggling to heat his tyres sufficiently before recovering fifth place late on.

Even though two of the three races could have gone better for him, Russell ended his debut weekend as the third highest scorer (behind consistent team-mate Antonio Giovinazzi and race three winner Leclerc) and having confirmed the promise he had shown pre-season.

?Well we hoped to be up there, that?s always the goal,? he says about the expectations he had going into his debut.

?But it?s difficult to know in Formula 3 until the first race whereabouts you are. This weekend we know we?re at the front.

?That last race was disappointing for us with fifth, so we?ve got to be setting our sights quite high I think.?

Finishing fifth from third on the grid might have been ?disappointing?, but some important points were still banked early in what could be a closely-fought season.

“We struggled in the last race to get a bit of tyre temperature in the beginning, and the other drivers were all over me and managed to get past me. I dropped back but came back to fifth so we were really quick in the end.

?It wasn?t the ideal race but like you say we?ve got points in the bag and that?s all well and good in the championship.?

Talking of the championship, winning on outright pace on the first weekend of the season means Russell has to be considered to be a candidate for a title challenge at this early stage: ?Yeah, we?d want to be up there. Certainly, top three is going to be a respectable goal.?

He?s fairly confident that he and the team will continue to show the same pace at the other circuits to come on the F3 circus’ 11-stop tour of the continent.

?Yeah, I think so. We should be quick at the following races and no reason why we shouldn?t continue getting results.?

Russell says that he’s “getting on really well” at Carlin and adds that having the more experienced Giovinazzi (now in his third year in F3) as a team-mate to learn from has aided his transition into the series.

That experience will make Giovinazzi and F3 veteran Felix Rosenqvist – who looked ominously fast at Silverstone even though a qualifying exclusion robbed him of points – hard to beat. Russell however looks perfectly capable of impressing against them as the season goes on. 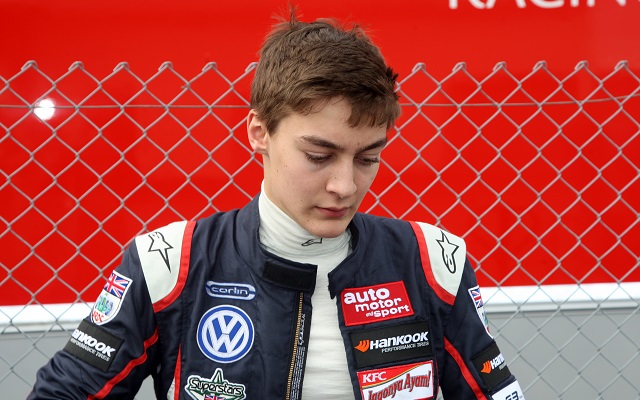 Matthew Graham back with AVF for Eurocup opener in Aragon