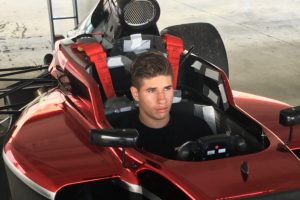 Canadian karter Antonio Serravalle will compete in Pro Mazda this year as he makes his single-seater debut.

The 15-year-old has been one of the top junior karters in Canada over the last few years, with more modest results on the European and world stage.

He will drive for Exclusive Autosport in his first season in car racing, and will partner compatriot Parker Thompson, who has spent the last three years racing in USF2000.

?It’s an all-Canadian team and they seem to be on the way up at a quick rate. It will be a great challenge for me to move up to cars and jump right into Pro Mazda, which is something that my father has made me used to by now as I?m always moving up to higher class as soon as he sees that I?ve been quick enough to win.

“I tested a USF2000 car at Homestead but my karting focus has been the KZ shifter kart class this year, so we felt that the car may be a little slow for my driving style.

“Michael [Duncalfe, team principal] gave me a great opportunity to join his team with Parker as a teammate. The team also has a really good top engineer in Tim Lewis, and I know that he will get the most out of the new PM-18. I’ve tested the car; it’s amazingly stable and quick, so I?m looking forward to St. Petersburg.?

Exclusive raced only in Formula Ford from its inception in 2013 to ’17, when it expanded into USF2000. 2018 will mark the first occasion it has entered Pro Mazda.

?We?re extremely excited to begin our first season in the Pro Mazda Championship, and I?m pleased to bring Antonio into the EA program to present a two-car effort in 2018,? said EA team principal Michael Duncalfe.

?It will be good for us to have two streams of data and as a team owner, I?m also very excited to watch Antonio push himself to develop in this competitive landscape.

“Even though he?s just 15, he?s run high-level international and national karting events and series for many years where the pressure is intense, and I believe that he has the experience necessary to take up this challenge.?