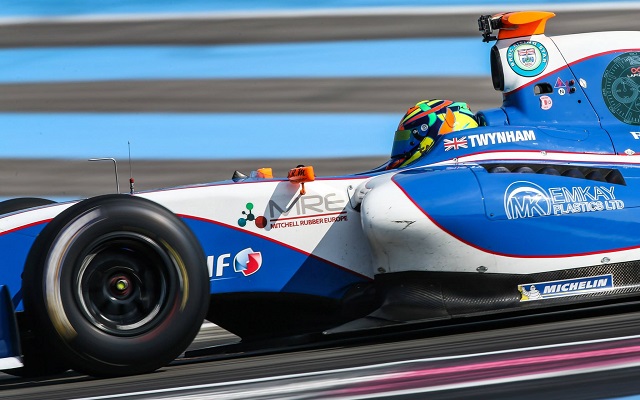 2014 Formula Renault 3.5 competitor Cameron Twynham has announced a deal to move into the Porsche Supercup this year.

The 19-year-old Briton will race for the MOMO-Megatron-Patrax squad in the single-make series that supports Formula 1 Grands Prix.

Twynham’s stint in single-seaters began in 2012 in the final season of the Intersteps series for Formula BMW machinery, in which he finished fourth for Fortec Motorsport.

He stepped up to Formula 3 equipment for 2013 and finished second in the F3 Open’s Copa class in an older F308 model.

He contested the first four rounds of the 2014 series (renamed to Euroformula Open) before joining the Formula Renault 3.5 Series with Comtec Racing. He finished 11th on his debut weekend at the Nurburgring and also took part in the subsequent rounds at the Hungaroring and Paul Ricard.

?After a lot of soul-searching and discussions with my father and manager I felt it was time to move out of single seaters and into GTs,? said Twynham. ?We all believe there are more opportunities in this type of motorsport for young drivers and, these days, it is far more productive than the current state of single seater racing.

?I was introduced to the team by my manager Rod Vickery and, after a successful two-day test, was delighted to be offered a contract to drive for them this year.

?This is the most competitive one-make series in the world, but if you are successful it can be a great opportunity to become a professional factory GT driver, as has happened with previous winners of the championship.?

Team owner Andreas Leberle commented: ?Rod Vickery is an old friend and assured me Cameron was the type of young driver we needed in our team. The entire team was pleasantly surprised that for such a young driver with no experience of GT cars he was quickly on the pace.

“He drove faultlessly over the two days, especially in the wet on day one, and didn?t put a wheel wrong. I believe we have a very quick driver with a lot of potential and are looking forward to a strong season together.?