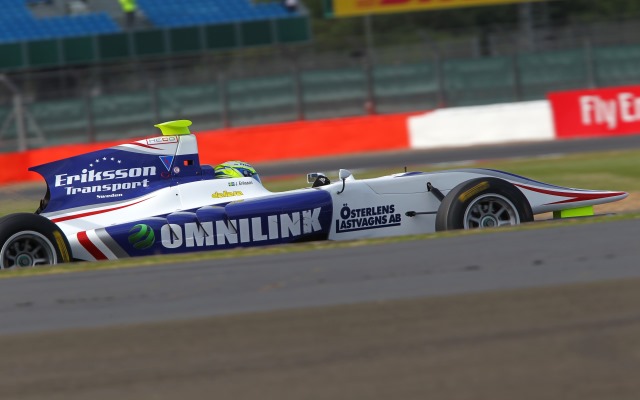 Jimmy Eriksson slashed Alex Lynn‘s advantage at the head of the GP3 standings as he beat the Red Bull Junior to pole position at a wet Silverstone.

Lynn had looked set for his third pole from as many rounds in GP3 after going a second clear at the top of the times with about five minutes left.

He was unable to improve his time after that however, and Eriksson capitalised to better Lynn by 0.316 seconds with one minute left. The Swede came into the weekend second in the standings, and the four bonus points for pole have cut his gap to Lynn to nine points.

Making use of the experience gained in his British F3 appearance at Silverstone six weeks ago that included wet running, Marvin Kirchhofer beat ART team-mate Dino Zamparelli to third by just 0.007s.

Jann Mardenborough took fifth with a lap that began with a session-best first sector but saw him lose time following a backed-off Lynn through Maggots and Becketts.

The session had a lengthy delay early on after apparent contact between the two series debutants Mitch Gilbert and Sebastian Balthasar. Balthasar lost his rear wing, while Gilbert’s Trident car suffered significant damage and appeared to have rolled over on the approach to Stowe.