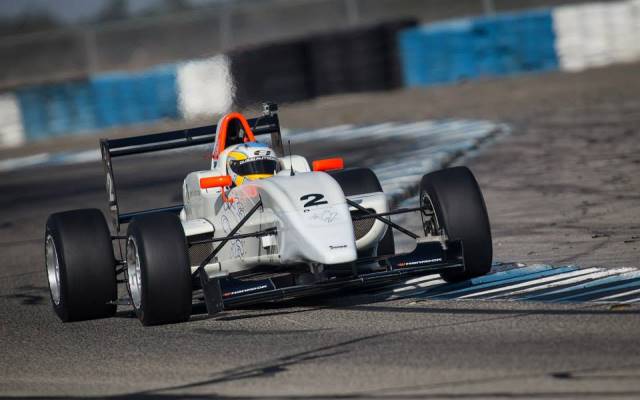 Ed Jones recorded the fastest time in free practice for the second event of the Florida Winter Series at the Palm Beach circuit.

Antonio Fuoco set the pace in the first session of the day, stealing top spot away from session-long leader and fellow Ferrari Driver Academy member Raffaele Marciello after the chequered flag.

Jones hit the top of the session second with five minutes left on the clock, when running was ended early by heavy rain. Marciello was again second, 0.065 seconds behind.

Van de Laar was third, closely followed by Calderon, Stroll and Verstappen. Latifi and Fuoco rounded out the top eight.

A damp start meant the third and final session was not as fast, but the top spot changed hands several times towards the end. Latifi finished quickest ahead of van de Laar and Stroll.

Fuoco was fourth ahead of Marciello, Calderon, Jones and Verstappen.

Alex Bosak and Vasily Romanov rounded out the day’s top ten drivers, ahead of Takashi Kasai.

GP2 commentator Will Buxton has taken over from Autosport’s Ben Anderson in the guest entry for this weekend. He was eight seconds off the pace in the first session but cut the deficit to five in session two, only to miss out on crucial running in the final session due to a mechanical issue.