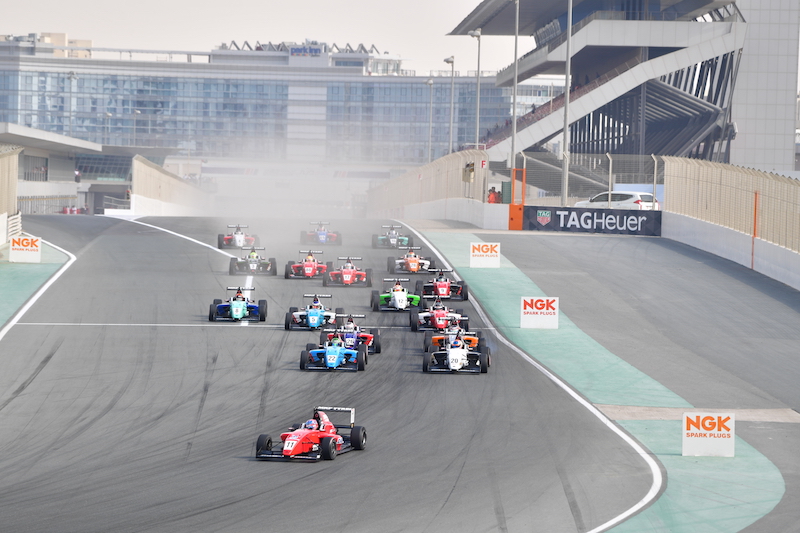 Felipe Drugovich began the second round of the MRF Challenge in Dubai with another win, but an electrical problem at the final corner in race two reduced his points lead over winner Rinus VeeKay to just two.

Formula 4 South East Asia champion Presley Martono had beaten Drugovich to pole position in qualifying by 0.034, but a poor start from the Indonesian allowed the Brazilian to take the lead.

Drugovich went on to take an uncontested third win of the campaign, two-and-a-quarter seconds ahead of Euroformula Open racer Alex Karkosik, who held off VeeKay by just half a second.

Gachot led from reversed-grid pole in race two, but VeeKay moved up from fourth to second at the start and then claimed the lead on lap three of 10.

Over the remaining laps, VeeKay opened up a winning margin of 11 seconds, helped when Drugovich hit trouble at the finish.

From sixth on the grid, Drugovich had worked his way up into second place but he slowed at the final corner with an electrical issue, eventually limping across the line in ninth.

With VeeKay having posted the fastest lap in both races, he moves to just two points behind Drugovich, who started the day with a 17-point advantage over Martono and 19 over VeeKay.

Gachot was promoted to second at the line at the head of a string of cars also featuring Falchero, Martono and Singaporean teenager Danial Frost.