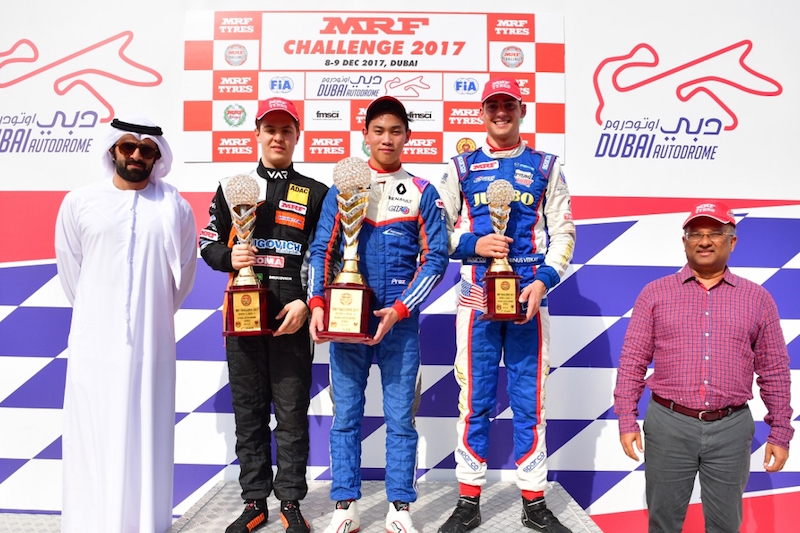 The three-way MRF Challenge title fight continued on the second day of racing at Dubai Autodrome, with Presley Martono taking his first win following another victory for Felipe Drugovich.

The Formula 4 South East Asia champion finished second to championship leader Drugovich in the first race of the day, after the Brazilian overtook Martono for the lead on the second lap.

Martono hounded Drugovich to the finish, never being more than a second away, and got his fourth podium of the season. Drugovich’s “sweet” win was his fourth of the season, and extended his championship leader over Rinus VeeKay and Martono, which had been greatly reduced by his last lap electrical issue in the second Friday race.

Alex Karkosik battled Harri Jones for third for much of the race, with Karkosik prevailing and Jones dropping down the order after Karkosik’s lap seven move.

Robert Megennis, who will stepping up to Pro Mazda from USF2000 next year, therefore inherited fourth, ahead of Michelangelo Amendola, Manuel Maldonado, Nazim Azman, Pavan Ravishankar, VeeKay and Louis Gachot.

Jones was initially promoted to sixth from eighth, but was then handed a 20-second penalty for continuously exceeding track limits, dropping him way out of the points.

VeeKay encountered a gearbox problem on the third lap, dropping him to the back of the field, but he fought back and benefited from the disqualifications and penalties to finish ninth.

Martono took the lead of the reversed grid race on the first lap, and fended off VeeKay, and then Drugovich, to take his first victory of the season.

VeeKay held second for the first six laps, and his battle with Drugovich for second in the middle of the race gave Martono a crucial gap up front. Drugovich closed in, but like in the race before there was no way past the leader, and he settled for second and an extended championship lead.

VeeKay finished third, ahead of Jones and Falchero, both glad to gain back some of the points they had lost in the race prior. Less glad was Karkosik, who was disqualified from fourth after failing to serve a drive-through penalty for jumping the start.

Amendola was sixth, ahead of Megennis, Gachot, Henning Enqvist and Maldonado, whose first lap collision with Frost brought out the safety car and led to Frost retiring.