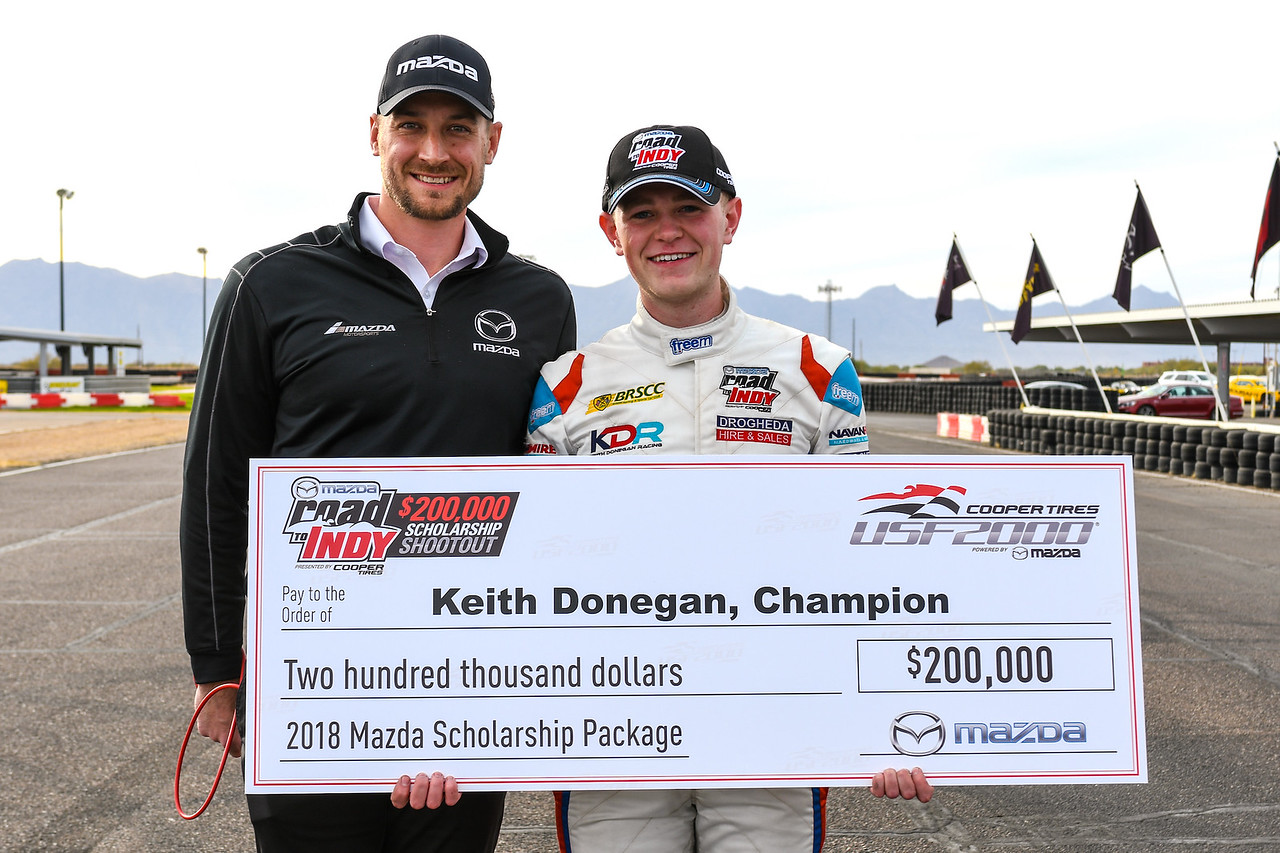 Irishman Keith Donegan became the second ever winner of the Mazda Road to Indy Shootout on Sunday, bagging himself a $200,000 scholarship for the 2018 USF2000 season.

20-year-old Donegan, who earned his spot in the Shootout by finishing second at the Formula Ford Festival at Brands Hatch, was one of 17 drivers selected for the Shootout, which encompassed nine nations.

The Shootout took place over two days, and culminated in a half hour race between five of the 17 entrants. Donegan was joined in the final race by Team USA Scholarship winner Aaron Jeansonne, Australian Formula 4 runner-up and New Zealand FFord champion Liam Lawson and karters Jake Craig and Olin Galli.

After the race, it took a further two hours of deliberation before the judges, including 2016 victor Oliver Askew, decided a victor.

They eventually decided on Donegan, although all five of the drivers in the final had?”shown enough to earn a Scholarship?.

?It really hasn?t hit me yet to be honest,? said Donegan.

?The weekend was really good and I really enjoyed it. I have to say a huge thanks to Mazda and Cooper Tires and everyone at the Mazda Road to Indy. I enjoyed every moment.

“Throughout the weekend we were consistent and I kept the small things in check. I didn?t make any stupid mistakes and kept my head cool and that really paid off in the end.

?You see all these champions here today that will go on to great things in the future and I?m sure the names you see here today aren?t going to disappear. They will be back up there and I?m sure I will be racing them again some day.

“It is an unbelievable opportunity to be given and for Mazda to provide that for any young driver, it just gives them that bit of motivation that you need because the States is where you need to go to become a professional these days. It is such a boost to my career.?

Kyle Kimball, manager of operations for Mazda Motorsports and one of the judges, said it “was really difficult” to decide the winner.

“But, at the end of the day, we feel really confident with our pick of Keith Donegan. He is going to be a wonderful representative for the Mazda brand, for the Cooper brand and the entirety of the Mazda Road to Indy in USF2000 next year.?

Scott Goodyear, IndyCar race winner and another of the judges, added: ?This is my second year [as a judge], and the first year I was a little nervous because you feel the weight of making the right decision.

“I knew that it was going to be very difficult again but I had no idea today was not only going to be a difficult decision but a heart wrenching decision because there were five guys that I wish we had five scholarships to apply.?