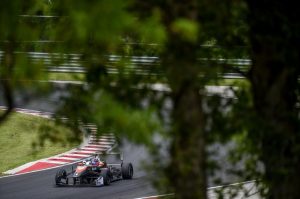 Felipe Drugovich continued his Euroformula Open dominance with his sixth victory of the season at the Hungaroring, bettering Harrison Scott’s 2017 tally of five in the first seven races.

The RP Motorsport driver held onto the lead from pole through two safety car restarts and took the chequered flag two seconds ahead of Bent Viscaal.

The first safety car came early in the race after two cars were left stranded at the side of the track in two separate incidents.

Guilherme Samaia came to a stop after colliding with Leonard Hoogenboom a few laps earlier. Samaia had tried to dive up the inside of his RP Motorsport team-mate, but clipped a kerb that put him on the back of Hoogenboom?s car. It damaged his own front wing, leading to his retirement, and Hoogenboom?s rear wing. The Dutch driver was able to continue, lasting six more laps before pulling into the pits to retire.

Further up the order, Alex Karkosik had been running fourth when he span and collided with the wall.

Viscaal was able to stay with Drugovich on the restart, but the championship leader eventually began to edge out a lead over the Teo Martin Motorsport driver.

Five laps before the chequered flag, the safety car was called out again after Drivex School team-mates Lukas Dunner and Christian Hahn came together at the first corner. Hahn was trying to move around the outside of Dunner when he turned into the Austrian’s path. He was sent into the run-off area with damage to the rear of his car.

This time, Drugovich was able to shake Viscaal on the restart and was unchallenged to the finish. Viscaal took second comfortably ahead of Marcos Siebert, and is now level with Matheus Iorio for second in the standings.

Iorio, who could only manage eighth on the grip, enjoyed a steady climb up through the order to finish fourth, managing to pass Cameron Das in the closing stages of the race. Dunner took sixth, just ahead of Calan Williams.

Yves Baltas had been running at the sharp end of the field before a drive-through penalty for a jumped start dropped him to the back. He finished eighth ahead of Aldo Festante, the final finisher.