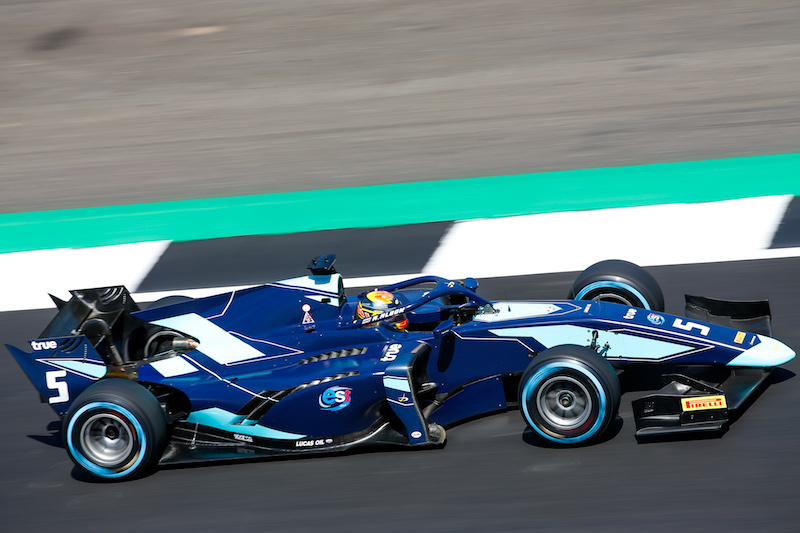 Russell kept the lead from his third consecutive pole position after the rolling start, opening his advantage over Albon up to 2.6 seconds in the first five laps before both pitted when the window opened at the end of lap six.

ART Grand Prix driver Russell was delayed in his pit box, with the mechanic on the front-left wheel seemingly needing to switch to another wheel gun in order to tighten the wheel.

That allowed DAMS driver Albon to come past for the net race lead, and there was worse news to come for Russell when he was handed a five-second time penalty for speeding in the pit lane.

Anglo-Thai driver Albon was never really challenged on track by Russell, opening up his lead to 4.7 seconds in the end for his second win of the year, despite Russell posting the fastest lap ? and claiming two bonus points ? on the penultimate tour.

Fuoco?s Charouz team converted its third and fourth on the grid into the same result in the race after Louis Deletraz re-passed Luca Ghiotto at Stowe on the final lap.

Ghiotto had jumped Artem Markelov when the two former team-mates pitted two laps later than the leaders, and passed Deletraz around the outside of Brooklands with five laps to go but couldn?t hold on.

Sergio Sette Camara had earlier also passed Deletraz but slowed out of fourth place with a smoking engine just before Ghiotto?s move behind.

Markelov was close behind Ghiotto at the finish, after re-passing Nyck de Vries at a virtual safety car restart on lap 22.

Jack Aitken took eighth at the line but loses out on reverse grid pole for Sunday after two five-second penalties: one awarded together with team-mate Russell for pit-lane speeding, the other for a VSC infringement.

That gives pole for Sunday?s race to Maximilian Gunther.

Tadasuke Makino led a large part of the race on the alternate strategy, and worked his way up from 14th to 10th at the line, but he also took a five-second penalty for a VSC infringement.

That allowed fellow hard tyre-starter Ralph Boschung to finish ninth with Norris in 10th after a stall in his pit-stop relegated him to the back of the field.