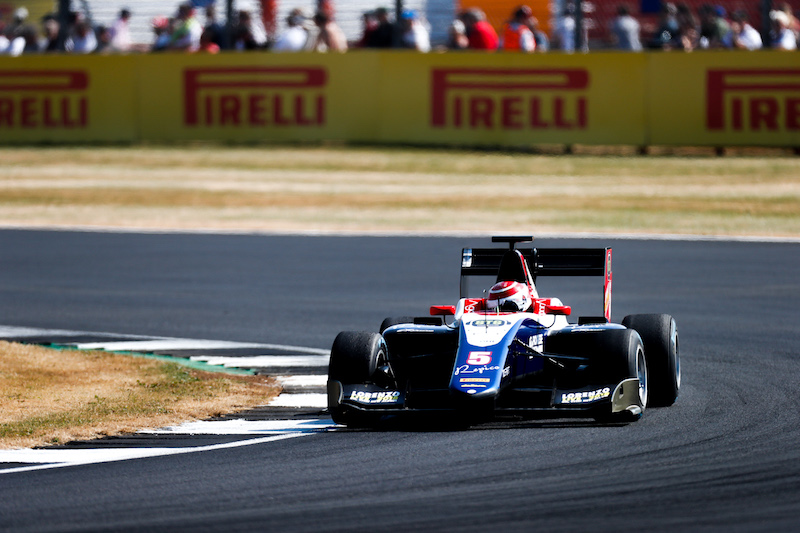 Pedro Piquet scored his first win in Europe after beating team-mate Giuliano Alesi in a Trident 1-2-3 in the second race at Silverstone.

From second on the grid, Piquet got a better start than pole-sitter Alesi to take the lead.

Piquet?s lead was still only at 0.6 seconds on lap seven of 15, but he then increased it to 1.9s before a lengthy virtual safety car period began on lap 11.

His advantage was down to 0.9s when he started the final lap shortly after the restart, but finished up 1.4s clear to take victory one week after he was beaten to the win in the corresponding race in Austria.

Alesi had to settle for second rather than take a fifth reverse-grid win since his maiden triumph at Silverstone one year ago.

Ryan Tveter completed an all-Trident podium to follow up on his fourth place from race one. He passed Leonardo Pulcini for the place into Stowe on lap five, and posted a fastest lap in his pursuit of his team-mates but ended the race under pressure from championship leader Anthoine Hubert.

After his race-one win, Hubert enjoyed a strong first lap to move from eighth to fifth, and after passing Pulcini, survived a grassy wide moment at Chapel to increase his championship lead.

Callum Ilott finished just 0.3s behind Hubert, having repeated his fastest lap from race one soon after passing Pulcini to get another two bonus points.

Nikita Mazepin finished seventh, recovering back past Jake Hughes after the Briton collided with Niko Kari at Luffield on lap 10.

In his defence, Kari had forced Hughes off at Brooklands, with the pair then making contact as Hughes tried to rejoin at Luffield, sending Kari spinning off.

It was Kari who was handed a time penalty from the incident for forcing Hughes off track, but as notice was served of that, he had parked up with rear-left suspension damage.

That happened under virtual safety car conditions following a clash between Joey Mawson and David Beckmann at Luffield one lap after the Kari-Hughes contact, which left Beckmann stranded in the gravel.