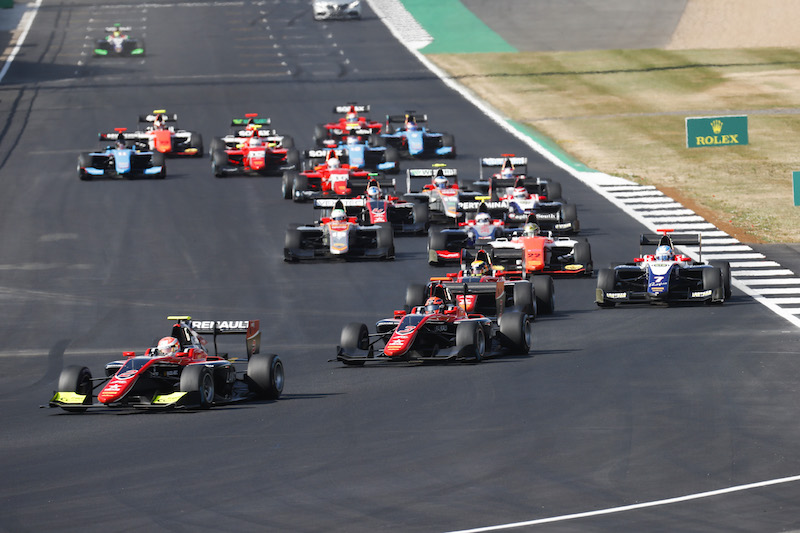 Anthoine Hubert reclaimed the GP3 points lead with victory in the first race at Silverstone ahead of ART Grand Prix team-mates Nikita Mazepin and Callum Ilott.

Starting from pole position, Hubert kept the lead through two virtual safety cars and one full safety car procedure in the early stages.

He immediately gapped Mazepin by 0.8 seconds at the third and final restart at the end of lap six, and stretched that to over one second within a couple of laps.

Mazepin was within 1.2 seconds with two-and-a-half laps remaining in the 20-lap race, but ended up 3.9s behind as Hubert took victory on the road for the first time in GP3, having been handed his Paul Ricard win in the stewards? room.

Ilott, who gained third from a slow-starting Giuliano Alesi at the start, was unable to seriously threaten Mazepin, and despite setting the fastest lap at three-quarter distance, he falls six points behind Hubert.

Ryan Tveter had a clean run to fourth place for Trident in front of the battling Dorian Boccolacci and Leonardo Pulcini.

Pulcini made a superb pass around the outside of Boccolacci at Stowe on lap 10, but Boccolacci later responded to take fifth position back down the inside at the same corner with four laps to go.

Campos driver Pulcini was attacked by Pedro Piquet on the penultimate lap, but stayed ahead after a late defensive move on the Hangar Straight led to Piquet damaging his front wing, leaving him to settle for seventh.

Alesi set himself up for another reversed-grid win on Sunday (what would be his fifth such victory since his first at the same circuit one year ago), despite falling from sixth to 12th at one stage.

The Frenchman rallied late on and took eighth away from Joey Mawson on the penultimate tour.

Jake Hughes had been trying to pass Mawson when he slowed to a halt on lap 13.

Behind, Alessio Lorandi grabbed 10th place on the final lap having recovered from stalling at the start. He passed Niko Kari, who threatened to score points from 19th on the grid but ended his race with an extended wheelie after running wide over the kerbs at Stowe.

Contact between Julien Falchero and Juan Manuel Correa at the first corner of the race triggered the first safety car, before their team-mates Gabriel Aubry and Tatiana Calderon then collided at Luffield at the restart.

Soon after Aubry?s damaged car was cleared and the race was restarted, Calderon ground to a halt on the Hangar Straight to cause the intervention of the safety car.