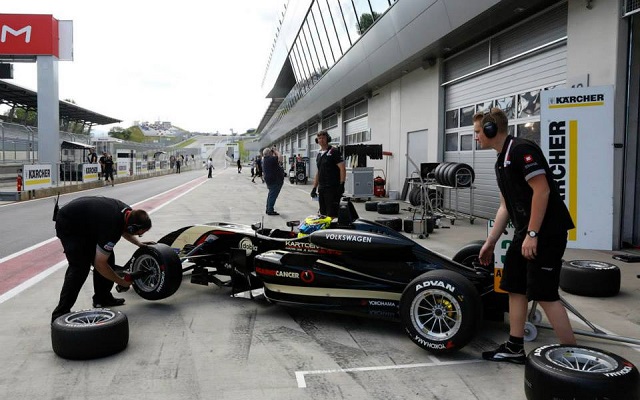 Motopark protege Indy Dontje secured his maiden race win in German F3, triumphing in the second race at Spielberg from sixth on the grid.

Amkon’s Maximilian Hackl started the race from reverse-grid pole, but it was Nikita Zlobin who led the field into turn one, with potential challenger Sam MacLeod seemingly stalling on the grid.

Zlobin managed to pull away slightly, but was then handed a drive through penalty, which ruined his hopes of a maiden podium.

Instead, it was Dontje who rose to the occasion, overtaking several cars on the opening lap to inherit the lead shortly thereafter.

Behind him, Hackl managed to fend off several drivers for a number of laps, but eventually slid down the order as Motopark drivers performed their usual reverse-grid charge.

Nabil Jeffri took over in second and set out after Dontje, with Markus Pommer securing third. Both drivers began closing in on the leader during the final minutes of the race, but neither managed to challenge the Dutchman, who took the checkered flag first.

Van Amersfoort Racing’s Weiron Tan finally made good on his pace shown earlier this weekend, taking his car from tenth on the grid to fourth at the line. Nicolai Sylvest beat out debutant Santino Ferrucci for fifth, with Hackl eventually finishing narrowly ahead of Andres Mendez in seventh.