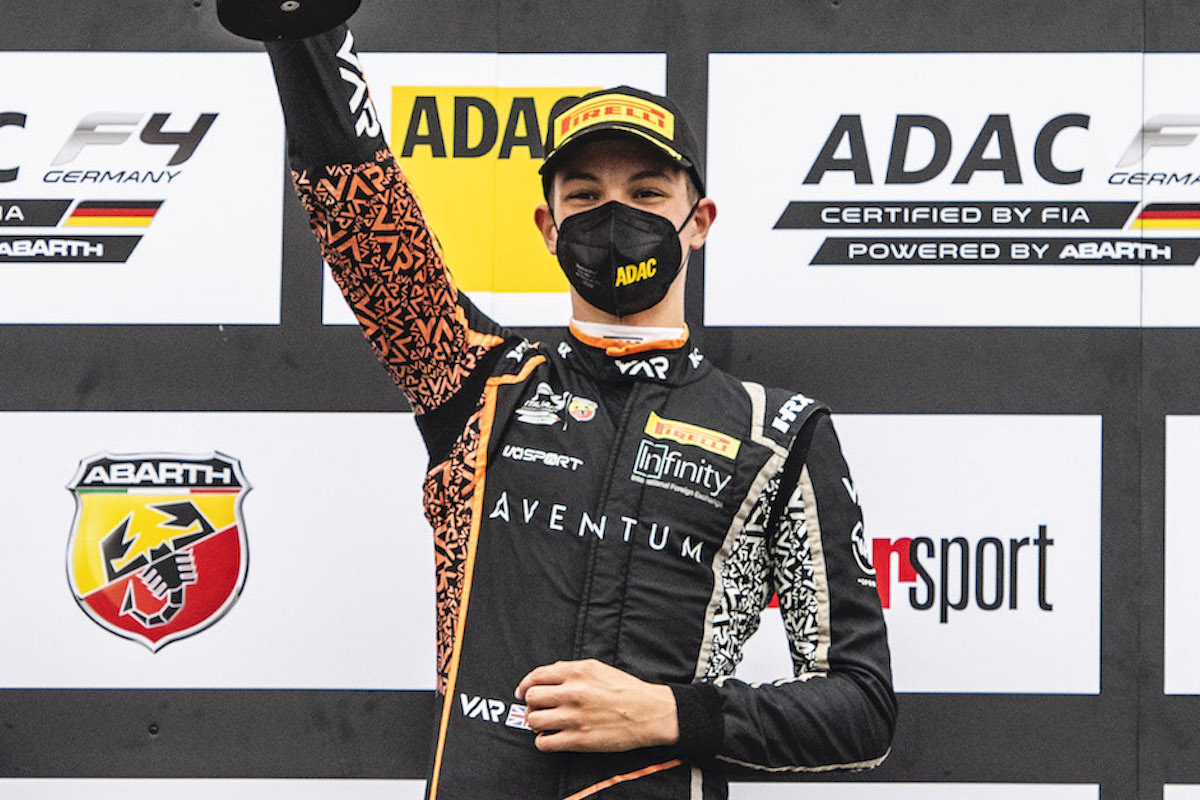 Ollie Bearman led the second ADAC Formula 4 race of the weekend from start to finish to move within touching distance of the championship title.

In tricky conditions, Bearman (Van Amersfoort Racing) did not put a foot wrong and was never challenged in the shortened 15 lap race. Rival Tim Tramnitz (US Racing) could only finish fourth, leaving him 21 points adrift of Bearman ahead of the season finale on Sunday afternoon.

Luke Browning put in a storming drive for US Racing to take second, to make up for crashing out of race one, having battled his way up from fifth on the grid. VAR’s Joshua Dufek completed the podium positions.

After a delay of close to two hours due to morning fog at the circuit, Bearman made a perfect start on the wet track to lead into turn one, followed by Joshua Dufek.

Tramnitz managed to get up to third at the start, demoting a slow-starting Alex Dunne. Trying to pass Dufek for second into turn one on the next lap, Tramnitz ran wide allowing R-ace GP’s Victor Bernier to nip past into third.

After briefly getting ahead of Dufek for second, Bernier then steadily dropped back down the field to finish seventh, although Tramnitz, in particular, struggled for a number of laps to find a way past the Frenchman. On lap seven, Tramnitz tried a move to the outside of turn one but ran onto the wet outside of the track, letting Browning past.

Browning, for his part, was able to make quick work of Bernier, passing through the AMG Arena, before a series of quick laps brought him onto the tail of Dufek. On lap 12 he got a run out of the Veedol chicane, the pair’s wheels millimetres apart as they ran side-by-side down the straight. Despite a brief slide in the AMG Arena, Browning was able to hold onto the position.

Tramnitz finally demoted Bernier as he got a good exit onto the pit straight, holding the inside line into turn one on lap nine to take fourth. However, he was unable to make any inroads into the gap to the top three.

Dunne retired on the penultimate lap with rear suspension damage, allowing VAR’s Robert de Haan to take an outstanding fifth place and rookie win on his second race weekend in F4, after another exciting duel with team-mate Nikita Bedrin and the slowing Bernier.

Bearman starts eighth for the reversed grid title decider, a position that would guarantee him the title at the end of the race even if Tramnitz can win from fifth on the grid. The teams’ championship will also go to the wire with US Racing heading VAR by just eight points. Nikita Bedrin has already wrapped up the rookies’ title for VAR.