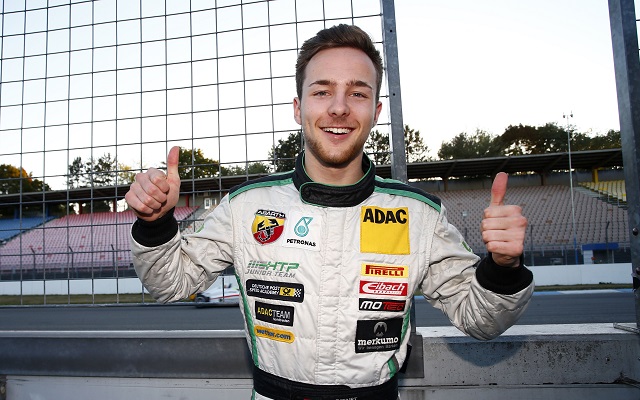 Marvin Dienst?became the 2015 ADAC F4 champion by winning the first race of the weekend at Hockenheim.

The German inherited the lead following a drive-through for his main rival Joel Eriksson for aggressive defensive driving, which put the Swede out of contention.

Although Dienst had a great getaway off the line, Eriksson stole the show at the start, flying past the slowly starting Janneau Esmeijer and forcing his was through Lando Norris to grab second.

Esmeijer’s race turned from bad to worse as he was sent into a spin at the hairpin, triggering several drivers to avoid his car, including Marilyn Niederhauser, who collected the Lechner duo of Kevin Kratz and Max Hofer with her manoeuvre, triggering the safety car.

Dienst refused to settle for second though, as he had battled Eriksson for several consecutive laps, drawing alongside the Swede on one occasion only to run wide at the hairpin.

He was soon demoted to third by David Beckmann with Norris and Mick Schumacher also catching up with the duo.

Following a couple of laps, a counter-attack from the series leader saw him reclaim second and he was on Eriksson once more, only to be slightly forced off to the grass by the Motopark driver.

Eriksson’s defensive driving resulted in a drive-through penalty which dropped him out of the point-scoring positions.

From that point on, Dienst’s lead was unchallenged as he quickly built a safe gap to see the chequered flag first for the eighth time this year.

The podium was completed by Mucke duo Beckmann and Norris, the duo the charging Tim Zimmermann at bay.

Mike David Ortmann grabbed fifth ahead of Toni Wolf, who scored his best result of the season in sixth, and Harrison Newey, who ended up as the best VAR driver after pitstops for both Joseph Mawson and Schumacher, the latter first suffering a puncture then later retiring.

The top ten was completed by Michael Waldherr, Marek Bockmann and Mawson, who charged through the field after a front wing change.