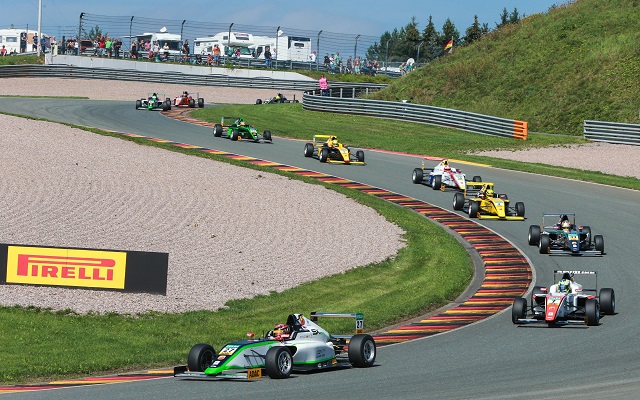 Marvin Dienst?was victorious in the second ADAC F4 race of the Sachsenring weekend, which included?two safety car stints and a red flag.

Just like in race one, the start saw Joel Eriksson steal the lead from championship rival Dienst.

Dienst was only third after the first lap, having been passed by Joseph Mawson as well.

The first big incident of the race, which brought out the safety car, was the result a?three-wide battle among Janneau Esmeijer, Marek Bockmann and Mick Schumacher, which ended in an inevitable crash.

While the first two retired in the gravel, Schumacher managed to rejoin the track, only to pull over a couple of corners later due to damage on his car.

In order to clear the track and fix a damaged tyre wall, the?officials brought out the red flag, the stoppage lasting for 15 minutes.

Eriksson built a clear lead at the restart, thanks to Dienst’s attacks on Mawson, which eventually ended in an overtake.

Now second, the HTP Junior closed the gap on Eriksson in no time and started to challenge him for the lead.

However, before a real overtaking attempt could occur, the safety car was back out to clear the beached car of Cedric Piro.

That did not save Eriksson though as Dienst had plenty of time to make a move after the restart.

The Swede defended masterfully but all Dienst eventually capitalised on a slight mistake to take the lead and win the race.

The podium was completed by Mawson, followed by Kim-Luis Schramm, David Beckmann and Tim Zimmermann.

Robert Shwartzman secured seventh, following his retirement in race one, while the top ten was completed by Jason Kremer, Michael Waldherr and Harrison Newey.