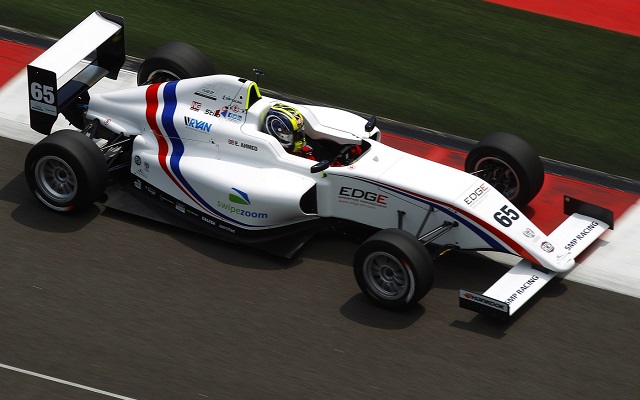 Enaam Ahmed followed up his maiden single-seater victory with a second SMP F4 win a few hours later in race two at Parnu.

The junior world karting champion made a good start but was unable to break away from points leader Niko Kari.

The gap between the two stood at around half a second for a large part of the race, but Kari was able to get alongside Ahmed at one point, only for the Briton to keep the lead on the inside.

Kari soon made a mistake and ran wide at the final corner, which enabled Ahmed to grow his lead to over a second.

That margin came down again for the last couple of laps, but Ahmed held on to win by just under half a second.

With Niclas Nylund struggling to get away from the grid, Ivan Matveev briefly held third before being passed by Vladimir Atoev and Aleksanteri Huovinen.

Atoev, Kari’s closest challenger in the points, came close to troubling the Finn after his error, but ended the race having to worry about Huovinen in his mirrors.

Alexey Korneev took fifth away from Matveev late on, while Nylund recovered from his stall to finish seventh.

Semen Evstigneev was eighth while Aleksander Maslennikov held off Nikita Sitnikov for ninth.

Single-seater debutant Alexander Vartanyan repeated his P11 from race one while Nerses Isaakyan retired to the pits after a spin.