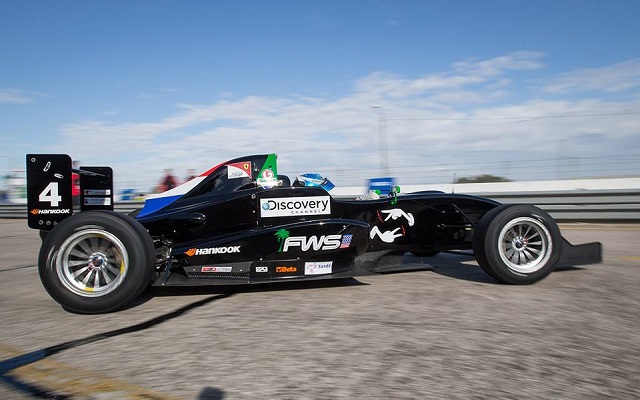 The wet track conditions led to the race starting behind the safety car and the race only went green a whole eight minutes after the start. Poleman Antonio Fuoco kept his lead as the safety car came in, while van de Laar was demoted to third by a charging Max Verstappen.

The karting graduate didn’t stop there and needed less than a full lap to catch up with Fuoco and seize the lead. However, Verstappen didn’t manage to pull away from Fuoco and van de Laar and would find himself under constant pressure for the entirety of the race.

Managing to stay within a second off the lead, Fuoco finally pulled off the move on lap 11, reclaiming the lead. When Verstappen then had a moment, his compatriot van de Laar seized second and, later on during the penultimate lap, managed to move into first.

The Dutchman then cruised to victory with Fuoco settling for second. Nicholas Latifi held off Verstappen for third, while Raffaele Marciello and Ed Jones finished as they ran in fifth and sixth respectively.

Lance Stroll took seventh, ahead of Ben Anderson and Vasily Romanov, who inherited ninth when Alex Bosak hit trouble on the final lap. The Polish driver himself rounded out the top ten, with Takashi Kasai in 11th and Tatiana Calderon registering the only retirement.

Verstappen will get two more cracks at taking his first win in single-seaters this weekend as he is set to start both of the remaining races from pole.