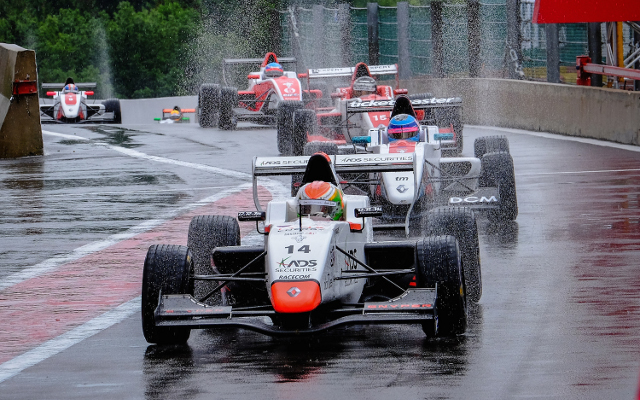 The second Formula Renault 2.0 NEC race at Spa-Francorchamps was limited to four laps behind the safety car in heavy rain, but Louis Deletraz picked up his fifth win of the campaign.

The race began behind the safety car and remained in that state until it was red-flagged during the fourth lap.

A result was declared with half points awarded and a podium ceremony held (with the rain now stopped), with pole-sitter Deletraz the winner ahead of race one winner Max Defourny.

While the top nine finishers matched the starting grid, there was a change for 10th.

Just as in race one, Ferdinand Habsburg headed to the pits at the end of the first lap. After getting out of the car he did rejoin, but just went a lap down.

Habsburg was not the only driver in trouble – returning veteran Kevin Kleveros stopped on track during the opening lap.