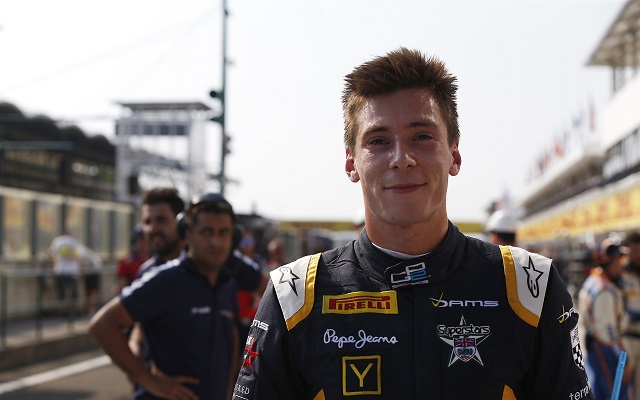 Alex Lynn converted his pole position into a victory in GP2’s feature race at the Hungaroring.

His teammate Pierre Gasly finished second to give DAMS the team’s first 1-2 in its GP2 main series history as well as the Red Bull junior’s?best finish of the season.

It was not the best of starts from pole-sitter Lynn but he did enough to stay in the lead.

The other front row starter, Stoffel Vandoorne, had an even worse getaway and the Belgian dropped down to fifth with the storming Gasly jumping into second.

Arthur Pic stayed in third but found himself overtaken by Raffaele Marciello at turn one next time around.

Soon after, the safety car? made an appearance after Sergio Canamasas ended up in the barriers. The Spaniard made contact with Nicholas Latifi at the turn six and seven chicane and went straight into the wall at the following corner.

While the DAMS duo stayed in the lead, the restart had one victim in Richie Stanaway, who had to pit due to a damaged front wing.

Marciello and Pic maintained third and fourth as the green flag waved, the Frenchman having to deal with the charging Vandoorne.

Unable to get past Pic, the Belgian soon pitted but things went from bad to worse for him as he received a five-second time penalty for an unsafe release.

Pic himself suffered a dreadfully slow pitstop and fell behind Vandoorne, Rio Haryanto and Alexander Rossi, rounding out the top four of the early stoppers.

At the front, Gasly, Marciello, Sergey Sirotkin and Jordan King managed to keep up with Lynn as the leading quintet on the different strategy.

On lap 24, Lynn came in for his tyre change, 19 seconds ahead of Vandoorne and rejoined behind Pic in provisiona lfifth place.

The Briton quickly forced past the battling duo Rossi and Pic and went after the chasing Haryanto.

Lynn caught up with the Campos driver with six laps to go and eased past the Indonesian on the outside of turn one.

Essentially, his overtake put him into the lead due to Vandoorne’s penalty but the Williams development driver soon cleared the Belgian on the road and went on to take the chequered flag in first.

Haryanto tried to make a move on Vandoorne as well but was met with severe resistance. In the end, the quickly lapping Gasly got past the duo to complete a DAMS 1-2.

Vandoorne finished third but ended up being classified fifth behind Sirotkin and Haryanto, the Russian celebrating his third consecutive feature race podium.

The Russian earned his third place at the penultimate corner in a move which ended up in a contact.

Haryanto reacted to Sirotkin’s ambitious inside move a bit too late, forcing the Russian onto the grass and eventually damaging his own?front wing.

King ended up sixth, followed by Marciello, who lost several seconds during his stop, and ART’s second driver Nobuharu Matsushita, who will start tomorrow’s sprint race from pole.

Rossi and Pic, who were provisional third and fourth before the second set of stops, completely lost traction and dropped as low as 12th and 13th. As a result, Robert Visoiu an Daniel de Jong inherited the final pointscoring?places.

Series newcomer Sean Gelael finished 13th despite being pushed to the pits at the start of the formation lap.