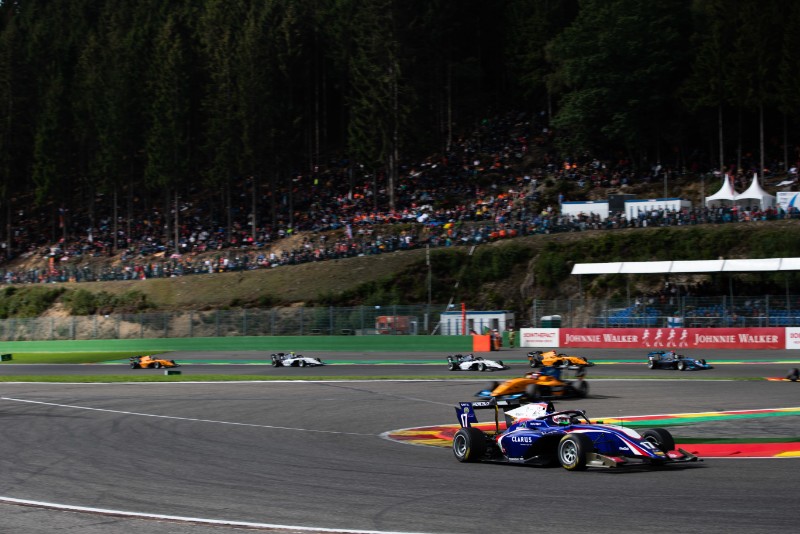 Trident?s Devlin DeFrancesco was twice penalised, as well as several others, at Spa-Francorchamps for driving offences in the two FIA Formula 3 Championship races.

The Canadian was deemed by stewards to be? wholly or predominantly to blame? for a lap one collision with Campos Racing?s Alex Peroni in Saturday?s race, which led to Peroni retiring.

DeFrancesco had locked up at Turn 8 and driven into Peroni, resulting in him seeing out the rest of the race down in 27th place. He was originally handed a drive-through penalty, which was converted to a 20-second post-race time penalty and left him in 29th.

In Sunday?s race, DeFrancesco was once again involved in a collision, earning him a five-place grid penalty for the first race at Monza.

This time, DeFrancesco outbraked himself on the run to Turn 5, colliding with HWA Racelab?s Jake Hughes. Both cars retired, with DeFrancesco being found at blame for the incident.

Since his title-winning Spanish F3 campaign in 2017, DeFrancesco is yet to score a point in single-seaters and is currently 23rd in the FIA F3 standings.

Carlin?s Logan Sargeant was another to get a five-place grid penalty for Monza, after he rearended MP Motorsport?s Liam Lawson at Turn 18 and span him around. Sargeant retired, while Lawson finished 19th.

A separate incident in the second race at Spa between Peroni and Lawson?s team-mate Simo Laaksonen resulted in the latter crashing at high speed into the Blanchimont barriers.

Contact between the pair had punctured one of Laaksonen?s tyres, resulting in a five-second penalty for Peroni, and the crash left Laaksonen?s car stuck underneath the tyre barriers.

Safety crews were able to free Laaksonen and he was taken to the circuit medical centre where the Finn reported that he had back pain.

He was then taken to the Spa circuit’s medical centre before being released. He reported that he just felt slight back pain after the incident, and told Autosport that in the crash the tyre barriers had made contact with his helmet despite the presence of the halo cockpit protection device