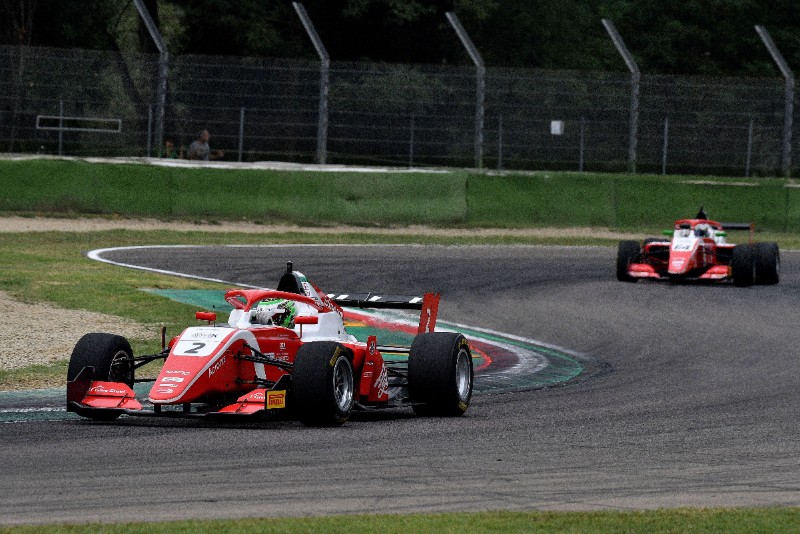 In the fourth race at Imola last weekend, an incident occurred between Prema?s Frederik Vesti and Van Amersfoort Racing?s Sophia Floersch seconds after the race had been put under safety car conditions.

Floersch, who had been ahead of Vesti in third, ended up half-spinning off track and falling to last place. Vesti moved up a place to third, and when the safety car returned to the pits he gained another spot within a few corners.

After overtaking team-mate Olli Caldwell for the lead, Vesti was handed a 10-second penalty for attempting to overtake Floersch under the safety car, but championship organiser ACI Sport?s post-race statement also said that Floersch ?doesn?t notice the yellow flag and has to quickly hit the brakes, she finishes out of the track limit and lets all the other drivers overtake her?.

Vesti had pulled away by five seconds before notification came that he was under investigation, and it grew to 7.566s when he was handed the penalty with one minute left of the scheduled race time to go. He was able to secure his 10th victory by finishing 10.015s clear of Caldwell.

In the previous race he had also been penalised, for ??faking? a zigzag to warm-up the tyres?, which cost him victory to team-mate Enzo Fittipaldi.

Floersch recovered to finish seventh, and discussed her disappointment at the severity of the penalty post-race.

?A driver pushed me out during safety car. He got 10 sec. and won the race. My race was done. #dealed #RacingvsPrema #Unbelievable #nofun #sropthisbullshit,? Floersch tweeted.

Some hours later, Vesti?s race four penalty was adjusted to 25 seconds – dropping him to sixth in the race classification and handing British Formula 4 graduate Caldwell his first FREC victory. (edited)