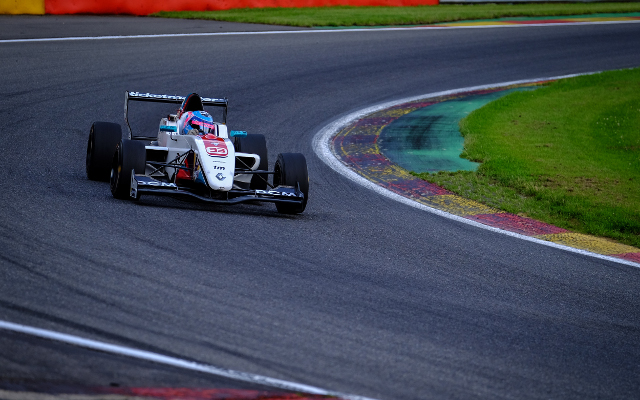 Defourny led the first of the 20-minute sessions from the off, and although other drivers took turns on top, the Belgian driver returned to the head of the order with three minutes remaining.

JKR’s unbeaten qualifying record in the 2015 NEC was broken, with Kevin Jorg and Deletraz having to make do with third and fifth respectively.

They were split by Defourny’s ART Junior team-mate Ukyo Sasahara, a winner at Spa earlier this year in the Eurocup.

JKR drivers Dries Vanthoor and Nikita Mazepin made the top 10, either side of ninth-placed Ferdinand Habsburg.

Deletraz found his usual form in the second session, his time of 2m17.963s enough to out-pace Defourny by 0.367s and score his seventh pole from nine races.

After taking a quiet 12th on the grid for race one, Alex Gill was fourth for Fortec ahead of Sasahara. Daruvala and Oskoui matched their first session results, followed by O’Keeffe, Vanthoor and Habsburg.

FR2.0 debutant Dan Ticktum was 14th and 12th in the two sessions for Koiranen, whose four cars were absent from the top 10 on their NEC return.