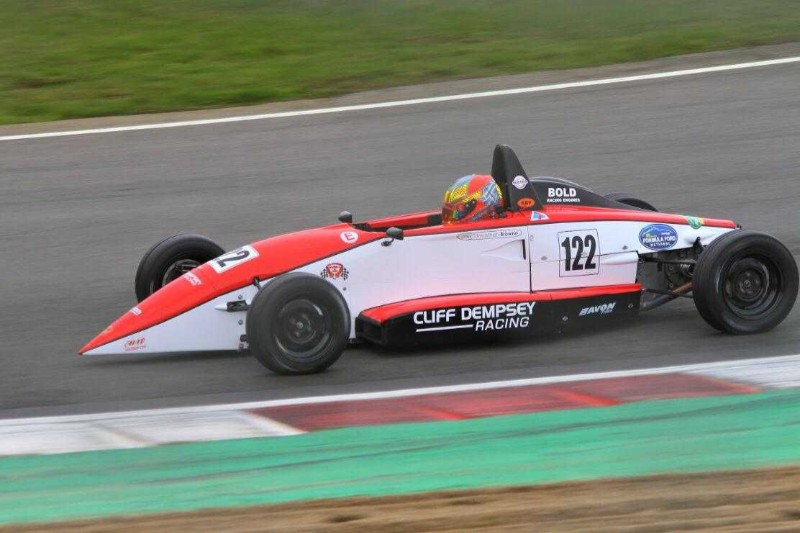 There was drama before the start of the wet race as Kevin Mills Racing’s Horatio Fitz-Simon spun off on the formation lap from third place, and by not being passed by everyone he was able to reclaim the spot on the grid.

He made the most of it by then challenging Team Dolan’s Matt Cowley for second place on the way into Paddock Hill Bend. While he couldn’t make it past, his hassling of Cowley over the opening laps allowed Browne to focus on his own performance.

Successive fastest laps meant he had a one-second lead by lap three of 15, a gap that had extended to four seconds by mid-distance.

That gap only got larger as the light rain became a little heavier, and it also helped Cowley distance himself in second place.

After a slow start that dropped him several spots from fourth on the grid, Team USA scholar Jackson Lee was actually able to reclaim the spot within the opening lap as fast-starting Pascal Monbaron went on the grass at Graham Hill Bend.

He then tracked down Fitz-Simon, and a move at Paddock Hill on lap five earned him the final podium spot – albeit 17 seconds behind Browne.

Ward dropped to the back of the order, just as John’s Racing Team driver Monbaron was starting his recovery. His pursuit of sixth place was halted by Oldfield Motorsport’s Milan De Laet, with the two international talents spending almost every lap going side-by-side.

On nine seperate occassions Monbaron tried a move at Paddock Hill, and when he did eventually make it work it didn’t take long for De Laet to return the favour and finish ahead.

Ward finished a minute back in eighth, ahead of car racing debutant Joseph Pomfret – who usually runs cars in series including the FIA Masters Historic Formula One Championship.

Monbaron’s team boss John Svensson was classified in 10th, but crashed out at Paddock Hill on the last lap.