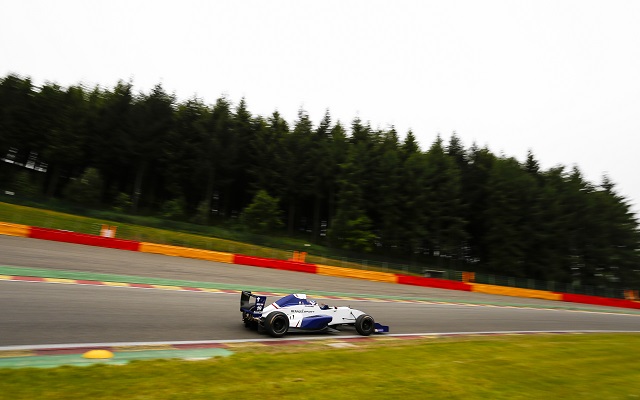 Koiranen racer Nyck de Vries was once again quickest in qualifying at Spa-Francorchamps.

The Eurocup’s usual reversal of the order in which qualifying groups take to the track did not faze the McLaren junior, who once again topped his Group A with a time good enough for pole position.

In Group B, which opened up qualifying this time around, the fight for pole was down to the ART Junior Team drivers, Bruno Bonifacio, Alex Albon and Kevin Jorg.

Aurelien Panis was the early pacesetter before being deposed by Albon with five minutes to go. In another couple of minutes, JKR’s Jorg took over at the top, only to be beaten by Bonifacio shortly thereafter.

Finally, in the final minute of qualifying, Panis returned to the top, securing a front row spot. Bonifacio took second back from Callan O’Keeffe narrowly prior to the checkered flag, with Jorg and Albon completing the top five.

Another ART Junior Team racer – Levin Amweg – set the early pace in Group A, before de Vries posted a lap that was quicker than the Group B benchmark, ensuring that pole would be decided in his group. Amweg took the lead back shortly thereafter, before Tech 1’s Egor Orudzhev vaulted to the top.

With three minutes to go, however, it was de Vries who went quickest yet again – and his time would not be toppled for the remainder of the session.

Dennis Olsen managed to slot into second, finishing the group running ahead of Orudzhev, Amweg and Andrea Pizzitola.