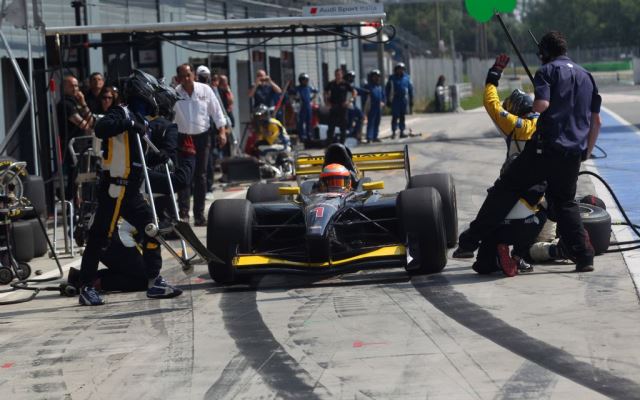 Markus Pommer claimed victory in the first Auto GP race of the weekend at Monza.

After qualifying on pole position, the German led at the start with Kevin Giovesi following him into second. The leading pair ran close until they made their mandatory pitstops in the latter phase of the race.

Pommer stopped first and had a trouble-free service from his Super Nova crew. Giovesi was less fortunate when he arrived at the Eurotech box a lap later, with a stuck wheel marooning him until he eventually rejoined down in eighth.

Tamas Pal Kiss closed to within a second of Pommer at the finish, but the German held on to claim his second win of 2014.

With Kimiya Sato absent this weekend, Kiss is now 21 points behind the Japanese driver with Pommer just one further behind.

Pommer’s team-mate Michela Cerruti claimed a maiden Auto GP podium on home soil in third, 15 seconds back. She moved up into third at the start, and although a slow stop dropped her behind Kiss, she came out on top of a battle with fellow Italian Andrea Roda for the final podium spot.

Euronova debutant Shinya Michimi took advantage of Roda losing that fight to move up into fourth but he then slowed to a halt with a car problem.

After unexpectedly qualifying on the front row for his debut appearance, Christof von Grunigen bogged down off the line, then ran through the gravel exiting the chicane after banging wheels with Kuroda, before ending his race in the Parabolica gravel trap after contact with Loris Spinelli.

Fittipaldi coasts to victory in race one at Donington