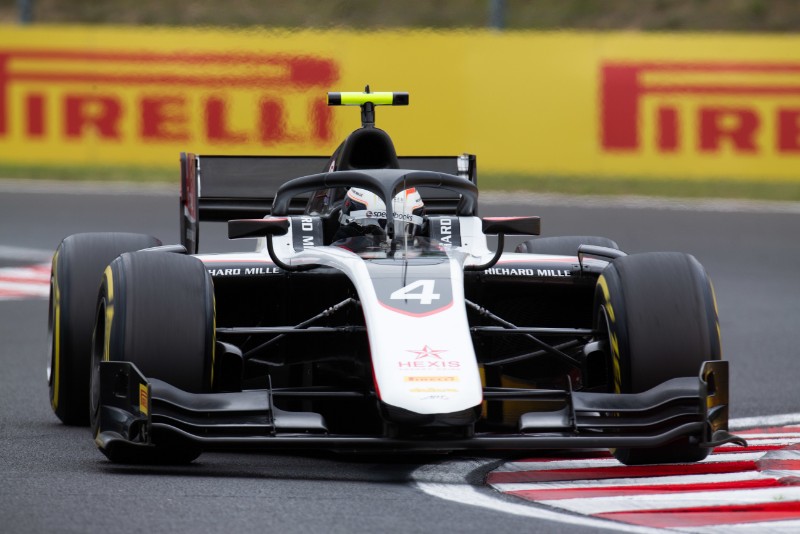 ART Grand Prix’s Nyck de Vries extended his Formula 2 lead with the bonus points for pole in wet conditions at the Hungaroring.

His closest title rivals Luca Ghiotto and Nicholas Latifi ended up second and third, with 52 points now covering the trio.

De Vries survived two off-track moments on his first out-lap of the session, sliding wide at Turn 2 before taking to the run-off area at the Turns 6 and 7 chicane.

Regardless, his first flying lap edged Virtuosi’s Ghiotto by 0.089 seconds, while DAMS’ Latifi built up his pace to slot into third by the halfway point of the session.

With conditions remaining wet in the closing stages, Latifi briefly vaulted to first before de Vries delivered a 1m49.809s lap to return to the top.

With a session-best time in sector one, Ghiotto managed to squeeze into second place but was 0.227s adrift of de Vries, with Latifi a further half-second behind.

Prema’s Mick Schumacher was on course to improve on his final lap of the session before running wide at the penultimate corner and making a near-identical error at the final turn to stay in fourth place.

Louis Deletraz had a lap time deleted for a track limits infringement at Turn 7 halfway through the session but recovered to take fifth for Carlin, 0.018s ahead of Sauber Junior Team by Charouz’s Callum Ilott.

Sergio Sette Camara struggled throughout the session, ending up in 13th for DAMS. Nikita Mazepin triggered the only red flag of the session when he stalled after spinning at Turn 7 on his outlap.