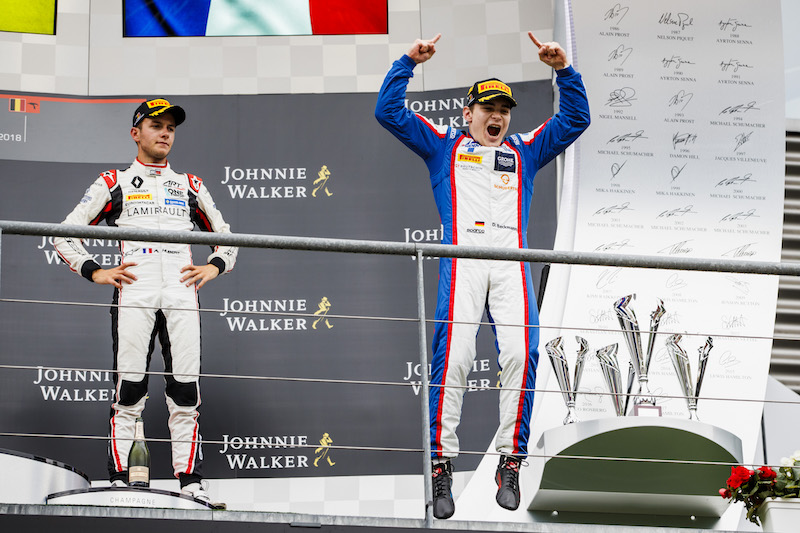 David Beckmann turned pole position into his first GP3 victory in the opening race at Spa-Francorchamps, resisting challenge from Trident team-mate Ryan Tveter who went from eighth to second at the start.

Beckmann, in only his second race weekend with Trident, made a strong start in damp conditions to keep the lead as series leader Anthoine Hubert made a poor getaway from second on the grid.

Pedro Piquet initially moved up to second past Hubert on the run to the first corner, but as he and the ART Grand Prix cars all ran deep and tripped over each other, Tveter used the clear inside line to take second.

Up at Les Combes for the first time, where the track seemed to be at its wettest, Tveter oversteered off the track but managed to keep his place – although he did appear to impede Piquet in the process and allow Hubert to claim third on the downhill approach to Bruxelles.

This helped to give Beckmann an initial two-second lead, but Tveter was gradually able to bring himself into the DRS zone.

Tveter got closest on lap nine of 17, catching Beckmann under braking at Les Combes but again running off the track.

This increased Beckmann’s advantage back up to two seconds, with the 18-year-old German eventually finishing 1.3s clear as he scored his first race win since the four he claimed in his rookie Formula 4 season in 2015, and gave Trident its first win in the opening race of a GP3 weekend for more than two years.

After his error, Tveter came under pressure from Hubert late on but held on by 0.6s to match his best GP3 result to-date, while Hubert increased his championship lead to 24 points with the help of the fastest lap.

Jake Hughes passed Piquet into Les Combes on lap three to take fourth position but he faded in the final three laps, ending up seventh.

Hughes running deep at the final chicane allowed Nikita Mazepin to come past him onto the penultimate lap, while on the final lap he was passed by both Callum Ilott and Joey Mawson along the Kemmel Straight.

Mawson immediately ceded the place again however when he ran deep, nearly allowing Giuliano Alesi to typically snatch eighth place and reversed-grid pole for race two, but the Arden driver somehow clung on around the outside of the Malmedy right-hander.

Ilott came to blows with team-mate Mazepin at Les Combes on lap two, with contact between the pair forcing Ilott off the road and behind Mawson.