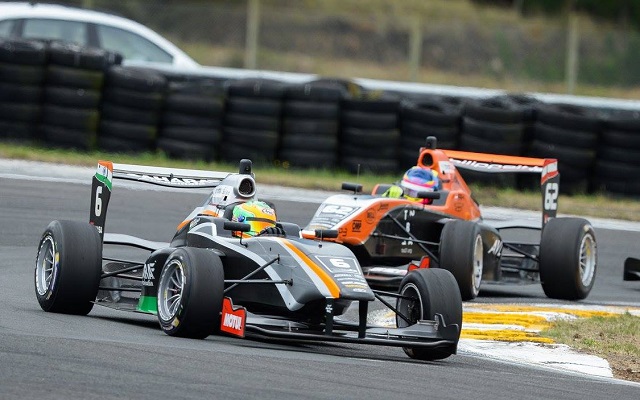 Jehan Daruvala collected his third Toyota Racing Series victory in the reverse-grid race at Taupo, having snatched the lead at a safety car restart.

Canadian Devlin DeFrancesco, who inherited pole position after reversing the top eight of race one, was quickly out of contention, having dropped to last place.

That allowed Brendon Leitch to grab the lead and the local driver quickly pulled away to build a lead of three seconds in five laps.

He was followed by Guan Yu Zhou, who made a move on teammate Jehan Daruvala on lap 3.

The Chinese driver’s chances for a win grew significantly?when the safety car had to be deployed due to a spin from Rodrigo Baptista.

However, it was Daruvala leading the field after the restart as Zhou and Leitch fell behind not only the Indian but Lando Norris, too.

Daruvala continued to lead until lap 13 when contact between?Julian Hanses and Kami Laliberte brought out the red flag and, only two laps remaining, the race did not restart.

As a result, the podium featured Daruvala, Norris and Zhou, with Leitch settling for fourth.

However, the Austrian lost three positions during the final lap to end up eighth behind James Munro and Artem Markelov.

The top ten was completed by Bruno Baptista and Taylor Cockerton.

UPDATE: Habsburg was among five drivers receiving a 30-second time penalty, which relegated him to 12th and put?Will Owen into the top 10.