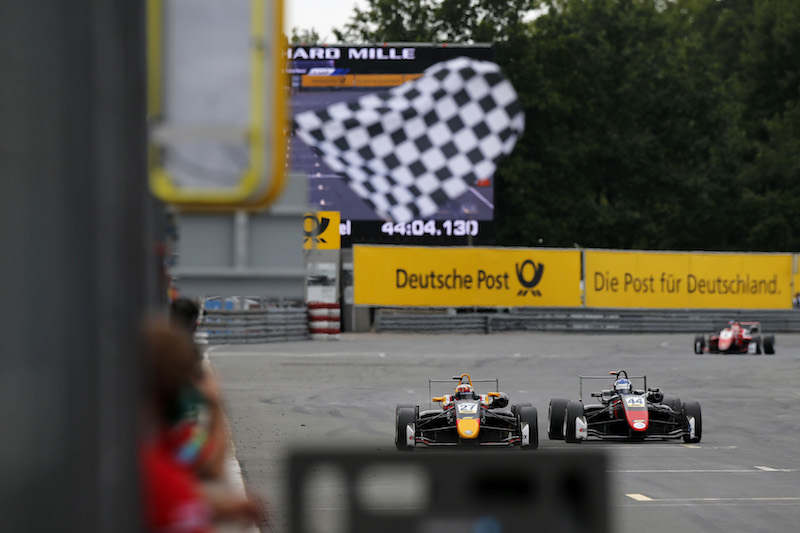 Dan Ticktum bounced back from his earlier horror crash at the Norisring to win the final European Formula 3 race of the weekend, denying Motopark team-mate Juri Vips by 0.057 seconds.

After his mechanics repaired his badly-damaged car to allow him to take up his third place on the grid, Ticktum gained second at the start behind pole-sitter Marcus Armstrong from the slower-starting Vips.

A collision exiting the first corner, triggered by contact between Alex Palou and Nikita Troitskiy, took an extremely long time to clear, initially under safety car and then under red flags.

The race restarted under safety car with 20 minutes to go, but there was only one lap of green-flag racing before the safety car returned after Keyvan Andres stopped into the final corner with damage before even taking the restart.

At the next restart, they managed two laps of racing before the next interruption, and Ticktum used the second of those laps to take the lead.

He got a run on Armstrong down the main straight, hung around the outside of the first corner and then swept ahead into the Scholler S, just before the safety car was called back out when Sacha Fenestraz found himself in the wars at Dutzendeich for the second time in three races – this time after help from Artem Petrov, who was sent into Fenestraz by contact with Mick Schumacher.

There were less than six minutes left on the clock at what would be the final restart, where Vips pressured Armstrong for the whole lap before finally getting by into?Dutzendeich.

This gave Ticktum a 0.9-second margin up front, but Vips cut this to just 0.3s heading onto the last lap.

He forced Ticktum to go defensive into Grundig and?Dutzendeich and then pulled out of the slipstream approaching the line, falling short by just 0.057s.

Championship leader Armstrong kept third after holding off Prema team-mate Guan Yu Zhou, who finished where he started in fourth but had dropped as low as sixth.

Jehan Daruvala was fifth in front of the three remaining Prema cars of Ralf Aron, Robert Shwartzman and Schumacher, who all demoted Enaam Ahmed in the closing stages.