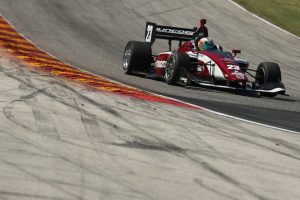 Juncos Racing driver Franzoni spent the first few laps in third, and took the lead when Santiago Urrutia misjudged a move on leader Patricio O’Ward at Turn 5 and sent both way off track.

O’Ward returned to track in second, ahead of Andretti team-mate Colton Herta and Aaron Telitz. Urrutia headed to the pits and retired from the race. The Belardi Auto Racing driver went unpenalised for his manouvre.

The battle for second position gave Franzoni breathing room in the lead, and meant he could look after his tyres early on. He did so effectively, and so even when those behind had stopped squabbling, he had enough tyre life to stretch his lead even further, eventually finishing almost nine seconds up the road.

Franzoni dedicated the victory to Jeff Green, his former Pro Mazda team-mate, friend and supporter who died in an accident in an F5000 car last week.

O’Ward lost second place to Herta on lap seven of 20, the latter sweeping around the Mexican on the run to Turn 5. The American had tried the same move on the previous lap, and was actually ahead before O’Ward came off the brakes and ensured he had his nose into the corner first.

Once ahead, it was a case of holding O’Ward off until the Mexican once again overworked his tyres. He lost 8s to Herta in the second half of the race, as well as conceding the final podium spot to BAR’s Telitz.

Herta now leads O’Ward by 17 points at the top of the standings, with Urrutia a further 27 behind.