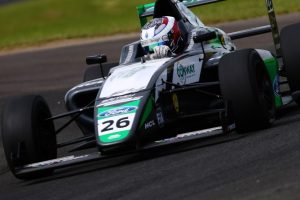 British Formula 4 championship leader Kiern Jewiss took his fifth win of the season from fifth on the grid in the second Croft race.

The Double R Racing driver moved up to third on the first lap, gaining one of those spots after title rival Ayrton Simmons suffered mechanical problems.

Reversed grid poleman Johnathan Hoggard and Jewiss’s team-mate Paavo Tonteri were first and second, and were having to defend hard to hold back Jewiss.

After several attempted moves, Jewiss finally got past his team-mate with a late braking move down the inside at Tower Bend, and two laps later he used the same corner to take the lead from Fortec Motorsport’s Hoggard, this time on the outside.

Tonteri lost another spot to Arden’s Patrik Pasma, who then crashed into Hoggard at the final corner and brought out the safety car, promoting Tonteri back to second.

Red Bull Juniors and Arden team-mates Dennis Hauger and Jack Doohan moved into third and fourth, Doohan doing so having started from 14th and last on the grid due to a mechanical problem in the first place.

The Australian moved past three at the start around the outside of Clervaux, then after making contact with Fortec’s Hampus Ericsson and controlling his car through a very grassy off, moved past three more to end the first lap in eighth.

A lap later he was seventh, and a perfectly executed dummy move on Simmons’ JHR Developments team-mate Josh Skelton at the last corner put him into sixth and on his team-mate’s tail.

Jewiss drove off into the distance when the safety car period ended, with Tonteri being left to hold off Hauger and Doohan. The Finn managed to hold on for second, as Hauger and Doohan made contact several times. There was no change in position, but Skelton almost snatched fourth place on the final lap when contact between the two Red Bull Juniors brought him right on to their tail.

Manuel Sulaiman finished sixth for JHR, ahead of Arden’s Seb Priaulx and the Fortec trio of Ericsson, who got spun round by the contact with Doohan, Hoggard and Lucca Allen.

Jamie Sharp had been running in eighth before a late error dropped him out of the points.

Pasma and Simmons both failed to finish, the latter’s retirement leaving Jewiss with a 49 point lead at the top of the standings.