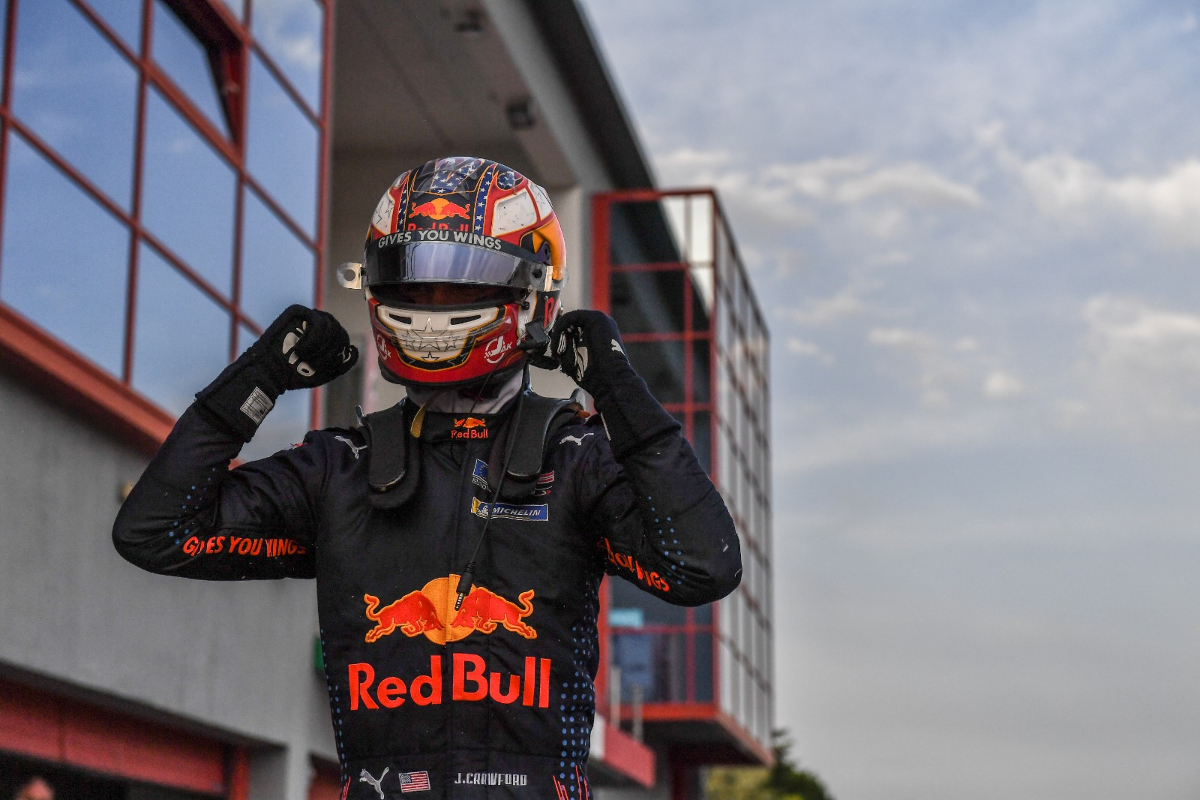 The Red Bull junior raced away from pole, establishing a lead of over two seconds straight away while fellow front-row man Cameron Das started slowly and was passed by Cem Bolukbasi and Louis Foster.

At Tamburello, Foster tried going around the outside of Bolukbasi but compromised himself, enabling Das to get through. The debuting Roman Stanek was just behind them, and this quartet of cars battled through the first half of the race.

Crawford meanwhile was almost in another race as he stretched out his lead to nearly 10 seconds before the safety car was called out when CryptoTower Racing Team’s Filip Kaminiarz had a strange incident on his own that sent him into the gravel.

The gap up front was reduced to nothing, but the brief safety car period didn’t slow Crawford’s progress as he immediately pulled away again on the restart and in the remaining nine laps put himself over nine seconds clear again.

Bolukbasi remained in second until two laps to go when he was being defensive by allowing his car to stray wide but it ended up going too wide and he four-wheel drifted across the gravel and conceded position to Foster.

Das, who had been in third until an earlier attempted move on Bolukbasi around the outside of Tamburello led to him being squeezed and allowed Foster to go around the outside of him on the exit, also tried to pass but was defended against hard and ended up side-by-side with the chasing Stanek.

That battle allowed Foster to break clear in second place and cut into Das’s points lead as he finished fourth just behind Bolukbasi. Stanek ended his first race in fifth, while Van Amersfoort Racing’s Rafael Villagomez earns pole for the reversed grid race two as he finished sixth.

The battle for seventh was a chaotic point through the race, first with Casper Stevenson nurfing Josh Mason out on lap one, which broke Nazim Azman’s front wing too, then Kaminiarz taking the position before his retirement.

New Carlin driver Enzo Trulli then went into the gravel while trying to get ahead of Villagomez, and towards the end Azman getting too ambitious – to his own admission – and crashed into Trulli at the top of the hill. They got going again, but Azman then had a front-left failure that sent him off again at Rviazza.

That could have promoted Drivex’s debuting Branden Lee Oxley or Enzo Scionti had they not collided on the final lap too, leaving Zdenek Chovanec – after several trips through the gravel – to take seventh.

Oxley and Trulli came eighth and ninth, and Scionti was classified a lapped 10th despite crashing out.