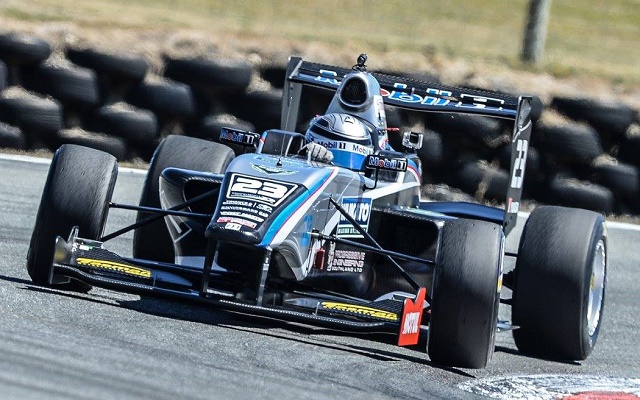 M2 Competition’s Jamie Conroy became the third race-winner of the 2015 Toyota Racing Series season, holding off opposition to win the second race of round two at his local track Teretonga.

The reigning New Zealand Formula Ford champion led all 15 laps of the race on his way to the checkered flag.

Having inherited the reverse-grid pole after mass penalties from yesterday’s race, Conroy held the lead off the line from Artem Markelov. Behind them, there was a heavy shunt for Victory’s Stefan Riener, which led to a red flag after just 30 seconds of running.

At the restart, Conroy held the lead, while Markelov was passed by Brendon Leitch, only to take the spot back a lap later.

From that point on, the Russian was ever-present in Conroy’s rear-view mirrors, but could not get close enough to strike and eventually settled for fending off Leitch.

As such, Conroy secured the victory, maintaining a five-race winning streak for M2 Competition. Markelov finished runner-up, with Leitch less than two tenths down in third.

Championship leader Lance Stroll enjoyed a strong showing, working his way around James Munro for the second time in two races to claim fourth. The Kiwi settled for fifth, a full eight seconds ahead of Ferdinand Habsburg.

Habsburg himself was busy fighting off Arjun Maini and Thomas Randle, eventually managing to narrowly beat the Indian to sixth. Behind Randle, Damon Leitch was ninth, with Mathias Kristensen rounding out the top ten.

Stroll’s performance ensures he will be the championship leader heading into round three at Hampton Downs as he has built up a 76-point lead over nearest rival Maini.

Brendon Leitch will lead the drivers into battle in the final Teretonga race, looking to claim Victory Motor Racing’s first win since his brother Damon’s at Timaru in 2012.

UPDATE: Brendon Leitch picked up a ten-second penalty for jumping the start, which only drops him two places – from third to fifth.

As such, championship leader Lance Stroll inherits his fourth podium in five races, while James Munro moves up to fourth.