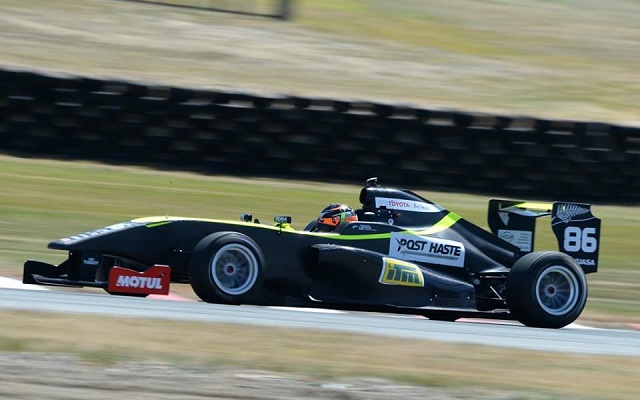 Victory Motor Racing’s Brendon Leitch triumphed in Toyota Racing Series’ Spirit of a Nation race in the second round at Teretonga.

Leitch led every lap from pole to break a five-race winning streak for M2 Competition.

The 17-year-old TRS sophomore got a solid start off the line to head American Santino Ferrucci. The Giles driver would be his main concern during the first half of the race and even got as close as three tenths away at halfway point, only to run wide and lose valuable time.

Ferrucci would then not be able to get close enough for an attack, leaving Invercargill local Leitch as the race winner, but the American did claim second, salvaging solid points a tough Teretonga weekend.

Sam MacLeod initially took third from championship leader Lance Stroll off the line, but the Canadian fought back to claim his fifth podium of the campaign. MacLeod then also slipped behind Arjun Maini to finish fifth.

Brandon Maisano and Artem Markelov followed in sixth and seventh, with Thomas Randle picking up eighth. Kiwi James Munro was ninth, while Charlie Eastwood recovered after dropping down the order, breaking into the top ten in the final stages.

Stroll’s superb start to the campaign sees him with a comfortable 88-point lead over nearest rival Maini. Every other driver in the field is at least two wins away from catching the Canadian.