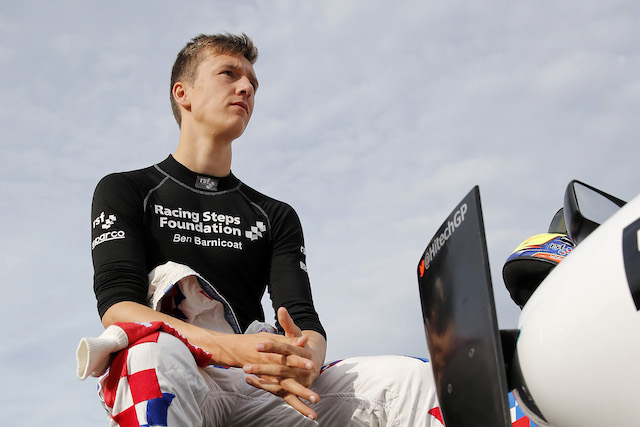 Ben Barnicoat will race GTs this year with McLaren, bringing a halt – for now at least – to his single-seater career.

The announcement of a place on the marque’s academy for young GT drivers didn’t come as a shock, because it had become clear at the end of 2016 that the 20-year-old Englishman didn’t have anything lined up for the coming season. But that in itself is a bit of a surprise.

Let’s make it clear: to be a professional GT driver for a brand like McLaren is a fantastic opportunity for any driver. For now, Barnicoat doesn’t have full factory driver status, with the Racing Steps Foundation still part-funding his programme, but it’s clearly an attainable goal within a year or two, and that’s a great chance for somebody who – coming from a relatively modest background in motorsport terms – could otherwise easily be sat on the sidelines.

But at the same time, it should be remembered that, aside from a tough final few months in Formula 3, Barnicoat has for many years shown the potential to be a Formula 1 star.

In karting, he was a big deal, and notably a thorn in the side of Max Verstappen and Charles Leclerc – coming second to the latter in the 2011 CIK-FIA Academy Trophy at junior level, then beating both to be European champion at senior level the following year after Verstappen was penalised.

Some top karters don’t translate their ability into cars, but that certainly wasn’t true of Barnicoat, who impressively took the Formula Renault NEC title in his rookie single-seater season, with a campaign built on maturity and consistency as much as on field-leading pace against more experienced opposition.

An assault on the Eurocup title the following season didn’t go entirely to plan, but after a mid-season change of engineer, he was the form man over the final three rounds, with a race win at each of them.

His F3 campaign last year had run out of steam by the end, but a rather lacklustre ninth in the standings masked just how brightly it had started, with two wins inside his first three weekends, and signs of genuine title prospects in the ilk of Leclerc and Esteban Ocon before him. 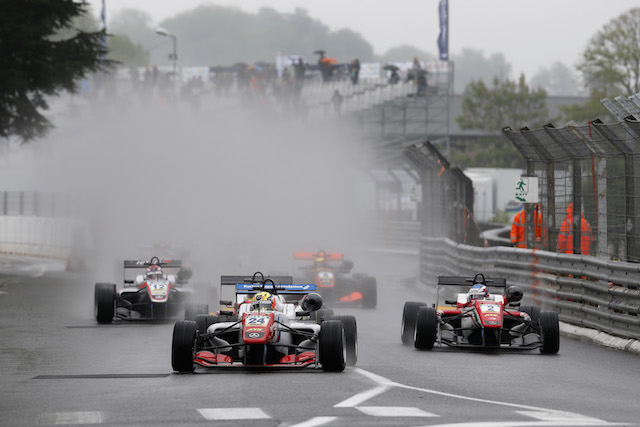 Barnicoat was quick out of the blocks in F3, then faded (Photo: FIA Formula 3 European Championship)

The way his season tailed off thereafter, with a loss of qualifying performance compared to team-mate George Russell and a number of incidents fighting in the midfield or lower, showed that Barnicoat had weaknesses that needed work, but nobody should be written off at that level on the basis of a bad half-season. With the right package and support, there’s little doubt he could have been a frontrunner once again if he returned for more F3 in 2017.

His move to GTs is just part of a growing trend, where other racing disciplines are becoming just as much of a targeted career route for young drivers as F1. There’s an increasing number of professional drives available, while grid numbers in the top junior single-seater categories decline as more and more drivers seek out alternatives.

There definitely appears to be a change in focus from RSF. Its stated ambition has always been to help talented but underfunded drivers to become professional racers, but up until now, there’s also been a clear desire to get a driver to F1 if possible.

Perhaps that will still be true, but it’s likely there will be a clear shift away from single-seaters in 2017. Jake Dennis seems set to join Barnicoat in making a sportscar switch, having already dipped his toes in that water last year. Oliver Rowland may continue in GP2, but this appears more likely to be funded by a team-mate’s backers than by RSF. The foundation could fully support just one single-seater racer this year, in Alex Quinn at the ‘cheaper’ end of scale in Formula 4 or Formula Renault.

While this change of focus is on-trend with the rest of motorsport, it could also be symptomatic of the fact that no RSF driver to-date has made it to an F1 race seat, despite each one being blessed with considerable ability and often with a favourable seat in a given series. Whatever the reasons, be them financial or performance-related, none has managed to convince an F1 team to give them a race drive.

So while Barnicoat is talented – arguably as much as any RSF driver before him – his recent inconsistencies paired with the troubles that drivers like Rowland have had breaking into F1 have perhaps motivated this premature step off the single-seater ladder.

He was of course tied to the McLaren F1 team before, but the association was always a relatively quiet one – with RSF keen to point out it was funding and managing him – and eventually it was completely muted. Whatever the reason for that, both parties have clearly agreed that his future lies away from single-seaters.

Perhaps that’s wise. Maybe he was too much of a nice guy for the notoriously cut-throat ranks beneath F1, and of course the big league itself. And there’s little doubting he’ll be fast in a GT car, particularly after Vincent Vosse of leading team WRT was so pleased to have him onboard for a race last year following an evaluation against Dennis.

Hats off to RSF for making the McLaren deal happen, and to Barnicoat for impressing both sides enough for them to put their trust in him. His chances of a long career as a professional racing driver are now more secure than ever, and he may well go on to win more races in GTs than he ever would have done in F1.

But in a few years when he’s chasing Blancpain titles and former counterparts like Verstappen, Leclerc and Russell are fighting over F1 glory, it will be hard not to wonder what might have been. 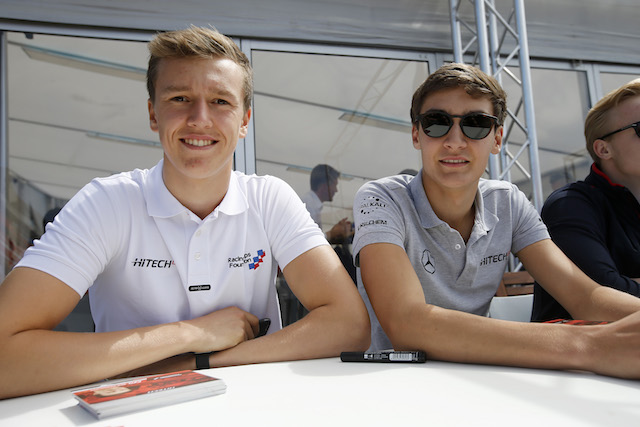 Within a week, both of these have sealed futures with big manufacturers, but only one is heading towards F1 (Photo: FIA Formula 3 European Championship)