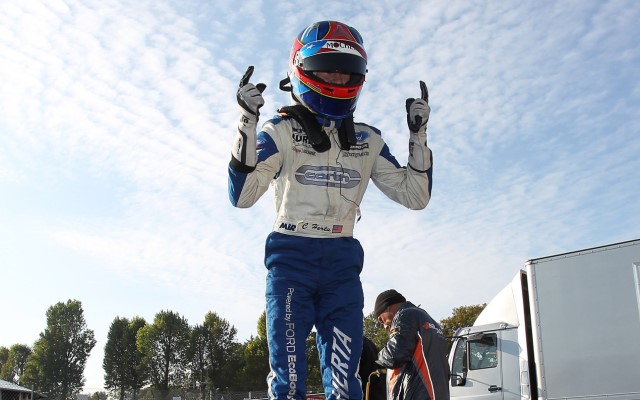 Colton Herta will compete for Carlin in Euroformula Open this year, not BRDC Formula 4 as originally planned.

Having finished third in MSA Formula in 2015 with Carlin, the American had been due to move into BRDC F4 this year along with the team and has tested the championship’s new car in recent weeks.

Instead, he will now compete in Formula 3-based Euroformula Open, where Carlin has also expanded into for 2016.

The team said the change was because Herta’s age would have prevented him taking part in the opening BRDC F4 round at Snetterton on 27-28 March, with his 16th birthday falling on 30 March.

The Euroformula Open season does not begin until 23-24 April, at Estoril.

“The F3 car is awesome to drive and although there will be a lot of new circuits for me to learn this year, racing on F1 tracks and historic circuits such as Spa will be fantastic,” said Herta.

Herta will still be a team-mate of Ameya Vaidyanathan this year as planned, after Carlin announced on Tuesday that the Indian driver will compete in Euroformula Open in addition as his BRDC F4 programme with the team.

Another driver from within the Carlin family to have moved into Euroformula Open this week is Petru Florescu – but the Romanian will drive for Teo Martin Motorsport.

After a promising karting career was cut short by serious injury in 2013, Florescu made a return to racing last year in MSA Formula with Carlin and finished 11th in the standings with a best finish of fourth.

He was still testing an MSA Formula car with Carlin as lately as last Wednesday at Thruxton though, and has said that further details of 2016 plans in addition to his Euroformula Open campaign will follow.

He joins Tatiana Calderon, Nikita Zlobin and Jose Manuel Vilalta at Teo Martin Motorsport – which has acquired the former De Villota team alongside its entry into Formula V8 3.5.

Euroformula Open’s ‘Winter Series’ pre-season tests begin at Jerez on Thursday and Friday. Notable drivers on the entry list include Matteo Ferrer in RP Motorsport’s #1 car, David Beckmann with Campos ahead of his step into European F3 and Ferdinand Habsburg with the Drivex team he raced for in the 2015 finale, while DAV Racing will field Jonathan Cecotto and Sisa Ngebulana alongside signed racer Kang Ling.