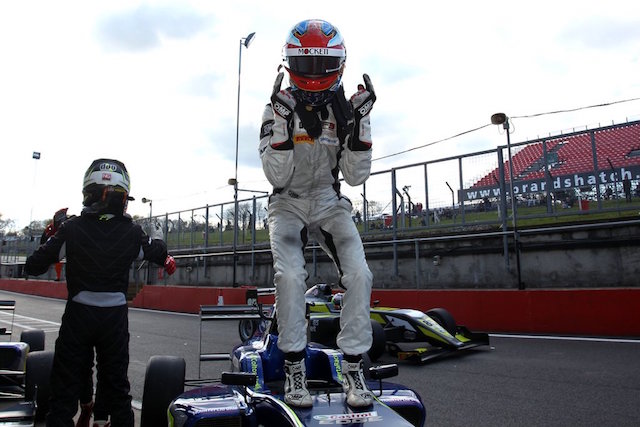 Colton Herta concluded his debut weekend in BRDC British Formula 3 with victory in the final race after keeping his Carlin team-mate Ricky Collard at bay.

Herta, standing in for his former MSA Formula team-mate Lando Norris while the 16-year-old was winning on his Eurocup Formula Renault bow at Aragon, had had a difficult weekend up until race three, crashing at the start of qualifying, finishing 10th from the back of the grid in race one and then a first-lap collision in race two.

Recovering to set?the fastest lap in that second race however put him on pole for the finale, and he led from the start. Collard meanwhile went from seventh to fourth off the grid, and passed Matheus Leist for third soon afterwards.

The race was halted halfway through after HHC returnee Raoul Hyman spun at Westfields, hit the barrier, came back across the track and was collected by Tarun Reddy. Both drivers were able to get out of their cars.

When the race restarted with five laps remaining, Herta was challenged by Collard, with the previously second-placed Enaam Ahmed pulling into the pits. Herta was able to build a margin of around half a second, which he retained until the end.

Thomas Randle came through to finish third from 14th on the grid ahead of Sisa Ngebulana and Aleksanteri Huovinen.

Championship leader Toby Sowery was due to start third but pulled into the pits at the end of the formation lap. He therefore only finished 13th, but with Ahmed 14th and Leist failing to finish after falling down the order, he leaves with a 19-point margin with Collard now his nearest rival.